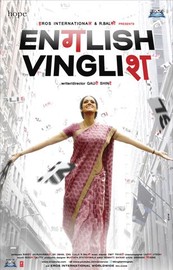 Natalie F
November 16, 2018
English Vinglish has a different view on motherhood than I have seen in other Bollywood films. While a film like Mother India shows its audience the hardships that a mother can go through and demonstrates the unparalleled love that a mother has for her children, English Vinglish allows its central female character to be more than a mother. The film demonstrates that it is possible to have multifaceted female character in Bollywood. Although being a mother is a large part of Shashi's identity, it is not all that exists in her life. For instance, she is also a baker. She is clearly proud of this work, as can be seen when she is overjoyed that she is called an entrepreneur by her English teacher. It was empowering to see that just because she has children does not mean that she can not have outside interests and passions.

One part of the film that was not so pleasing to me was the ending. I understand why Shashi decided to prioritize her family over her English classes, but it was still a bit disappointing to see her relinquish her independence. A traditional Bollywood mother will do anything for her family. Rosie Thomas asserts that in Bollywood films, a mother "is able to love and give unconditionally" as well as "keep the family and home together" (Thomas, "Melodrama and the Negotiation of Morality"). It would be incredibly unconventional to have Shashi simply abandon her family at the end of the film. I never expected that to happen. However, I did anticipate that her husband would come to realize that he had been taking her for granted. It was frustrating that she never had any sort of confrontation with her husband about his lack of respect for her. It seemed as if Shashi had not made any significant modifications to her old life, which undermined her growth throughout the film.

Sonia P
½ November 16, 2018
English Vinglish encapsulates the difficulties encountered by many Indians who are unable to speak English. Starring Sridevi as Shashi Godbole, a married woman whose children and spouse mock her inability to speak English. The other characters are played by Mehdi Nebbou (Laurent), Adil Hussain (Satish Godbole), Priya Anand (Rahda), Sujata Kumar (Manu), and Sulabha Deshpande (Mrs. Godbole) with guest star Amitabh Bachchan. The film follows Shashi as she travels from India to New York for her nieceďż 1/2(TM)s wedding. In New York she decides participate in a four-week English class with other non-native speakers. Although from different backgrounds, the class builds a strong relationship towards one another as they feel a connection to one another due to their similar struggle and desire to learn English. Laurent, a French man, in particular grows close to Shashi and develops romantic feelings. As a married woman, Shashi must decide whether or not to act upon her feelings toward Laurent. Due to the confidence provided by her classmates and her improved English, Shashi finally gains the respect of her family.

In many ways this film strays from the characteristics of a typical Bollywood movie. Unlike most Bollywood films, this movie provided no extradiegetic scenes and existed in a realistic world. Without the typical song sequences characteristic of many Bollywood films, such as DDLJ, Amar Akbaar Anthony, and Kabhi Khushi Kabhie Gham), English Vinglish has an overall more modern and realistic take on Bollywood cinema. According to Rachel Dwyer, ďż 1/2In recent years some of the multiplex films have been made with more dialogue in Englishďż 1/2 not to market films overseas (there has been no interest in these films at all from overseas distributors) but because it gives an element of realism to the filmďż 1/2Â? (Dwyer, ďż 1/2Zara Hatkeďż 1/2Â?). Much of this film is spoken in English as Shashi attempts to learn the language and gain respect from her family. This film would be enjoyed by many non-native speakers as they can relate to the struggles that Shashi faces and celebrate as she overcomes these obstacles. Despite the differences from most Bollywood films, the main characters in English Vinglish strongly value their familial relations, a value shared amongst most Bollywood films. The choice between family and love is a common theme throughout Bollywood as expressed in both DDLJ and Qayamat Se Qayamat Tak. English Vinglish continues to explore the never-ending conversation between the values of love and family.

Sophie%20 B
½ November 11, 2018
English Vinglish is remarkably different from most Bollywood movies, although it still employs many of the same themes and values of traditional Bollywood. It stars Sridevi as Shashi Godbole, a woman who isn't satisfied in her role as mother and wife. She finds herself stuck, in part because she doesn't know much English. Her family makes fun of her English and doesn't appreciate the work she does selling ladoo (Indian sweets) and caring for them. When she travels to New York for her niece's wedding she decides to learn English while she is there and enrolls in an intensive language program. It is in these classes that she finds a supportive community. The other students are from various backgrounds, providing unusually diverse representation, although the characters seem to be based on stereotypes. Shashi experiences independence in New York, learns the word entrepreneur, and gains self-confidence. She also meets Laurent, played by Mehdi Nebbou, who provides a love interest outside her marriage.

English Vinglish is a woman-centered film, directed by a woman, which frames Shashi by her roles as a mother and wife, but doesn't center on them. The main plot is driven by her quest to learn English, independent from her family. Director Gauri Shinde focuses on Shashi's personal journey, but frames it within Bollywood's family values. While Shashi is not always respected, she is portrayed as a good mother and wife. Ultimately her decisions are based on what is best for her family, not herself. Like the mother, Radha, in Mother India, Shashi cares deeply about her family. However, her strength is portrayed in a very different way. Radha is consistently strong despite overwhelming odds; strong in an impossible, superhuman way. Shashi is a much more realistic character who experiences normal displeasures and develops strength during the course of the movie.

I really enjoyed the progressive narrative, which follows a woman who is building her self-esteem. It also reveals the struggles women face. For example, Shashi notes an inequality saying "When a man cooks, it's art... when a women cooks, it's her duty." In addition, the music is catchy and Shinde does a wonderful job making the movie fast-pasted and very entertaining. I found the ending surprising and slightly disappointing, however, it is based on Bollywood morality. As Rosie Thomas writes, good, moral characters think about their family and community before thinking of themselves (The Moral Universe: Mothers and Villains). Shashi certainly fulfills this role. Overall, I believe this is a well-done, engaging film, which provides a compelling storyline unlike those of other Bollywood movies.

Lisa K
April 12, 2018
This is a very cute, easy to watch film with a good message. There are some special moments where the two main characters speak in their own native tongue and completely understand each other. A very Bollywood film in that there is the classic group dance scene. It was a pleasure to watch

merve c
November 4, 2017
i love the movie not becuse the movie is an exceptional art piece but it literally reflects the everday struggle of woman. I like the way she was able to develop herself

Judy H
½ August 6, 2016
Another awesome Indian movie! It emphasizes about the loving relationship and respect between a family. Highly recommended!

Pavan R
May 2, 2016
Very entertaining comedy and family drama. Lots of great lessons for a Indian family too. A must watch for the whole family

Jason H
½ January 15, 2015
For anyone that ever dealt with being a Stranger in a Strange land, this movie will hit home. It was very touching. It also deals with those in English Education as well. But basically it's a movie about family. Also, I like the Japanese title "Madame in New York" more than the English title.

Barry T
June 22, 2014
A delight from start to finish! Sredevi's return tothe big screen was well worth it. This is a very modern Bollywood film with songs but not sung by the cast. Its touching and well worth a watch

Yash B
½ June 12, 2014
Its a good hearted movie, despite being very over dramatic at times. The film has a lot of strong messages which I appreciated. Despite its repetitive nature it isn't a boring movie and its a joy to see this character grow. I do think that the main character has much less self control than the average person and it becomes an easy way for the conflict to develop. There are minor plot inconsistencies and the movie starts to get slower at times since multiple scenes show similar things happening, but ultimately its an enjoyable movie that also has great themes for everyone.

Shawn C
May 4, 2014
This was the best movie I saw last year, and I did not expect to like it. It is funny, contemporary, and beautifully written and acted. Most of the action takes place in New York City and New Jersey, so despite its characterization as a foreign film it seems very American. The story is surprising, not trite, and makes you want to cheer for the main character for all the right reasons. Really good movie. Fun.

Jignesh D
½ March 22, 2014
a story depicting each and every women, i think i see sashi in each and every women i have met in India. I guess for some the movie might seem unrealistic about the choice sashi makes in the end but to my core of heart i know thats what every women does when it comes to decision.

Becky C
January 20, 2014
"When you don't like yourself, you tend to dislike everything connected to you. New things seem to be more attractive. When you learn to love yourself, then the same old life starts looking new, starts looking nice."

Paris T
½ December 28, 2013
Wonderful movie pictures treasured feeling deep down in a mother's heart. To all mothers in the world, thank you.

Ying-ui C
½ December 27, 2013
"It's great like 3 idiots"someone said. I don't agree that. There is gender bias in this movie. Husband controlled wife's life without respect. No matter there are happy and different experience, But she has to come back to India. Because family and are most important for female in Easter culture. This movie express "although you had great adventure in New York, but you should stay with your husband, no matter you are no longer interested living with him. And he probably loved someone else already.