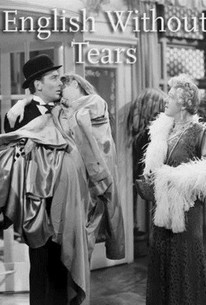 English without Tears is a gentle satire of the temporary relaxation of class barriers in wartime England. Michael Wilding portrays the faithful family butler to a fabulously wealthy household. Each member of the family greets the news of upcoming world conflict with a different reaction, the most altruistic of which is that of the daughter (Penelope Dudley Ward), who joins the home service. When the butler rises to the army rank of lieutenant, the daughter sees him in a whole new light and falls in love with her onetime employee. There's little in this frivolous film that hasn't been done elsewhere, except perhaps for the opening-scene romantic complications in Geneva, which set the stage for the film's finale. English without Tears was released in the US in 1948 as Her Man Gilbey. ~ Hal Erickson, Rovi

Joan Misseldine
as Girl at Dance

Beryl Laverick
as Girl at Dance

Heather Boys
as A Third A.T.

Vida Hope
as An A.T.

Andreas Malandrinos
as Man in Gallery

Patricia Owens
as (uncredited)
View All

Critic Reviews for English Without Tears (Her Man Gilbey)

English Without Tears is in places very funny, and in places labours a joke into insensibility.

There are no featured reviews for English Without Tears (Her Man Gilbey) at this time.