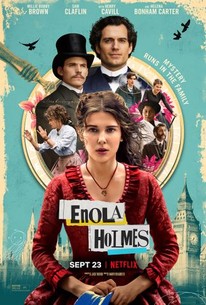 Critics Consensus: Enola Holmes brings a breath of fresh air to Baker Street -- and leaves plenty of room for Millie Bobby Brown to put her effervescent stamp on a franchise in waiting.

Critics Consensus: Enola Holmes brings a breath of fresh air to Baker Street -- and leaves plenty of room for Millie Bobby Brown to put her effervescent stamp on a franchise in waiting.

Critic Consensus: Enola Holmes brings a breath of fresh air to Baker Street -- and leaves plenty of room for Millie Bobby Brown to put her effervescent stamp on a franchise in waiting.

England, 1884 -- a world on the brink of change. On the morning of her 16th birthday, Enola Holmes (Millie Bobby Brown) wakes to find that her mother (Helena Bonham Carter) has disappeared, leaving behind an odd assortment of gifts but no apparent clue as to where she's gone or why. After a free-spirited childhood, Enola suddenly finds herself under the care of her brothers Sherlock (Henry Cavill) and Mycroft (Sam Claflin), both set on sending her away to a finishing school for "proper" young ladies. Refusing to follow their wishes, Enola escapes to search for her mother in London. But when her journey finds her entangled in a mystery surrounding a young runaway Lord (Louis Partridge), Enola becomes a super-sleuth in her own right, outwitting her famous brother as she unravels a conspiracy that threatens to set back the course of history. Based on the beloved book series by Nancy Springer, ENOLA HOLMES is a dynamic new mystery-adventure that introduces the world's greatest detective to his fiercest competition yet: his teenage sister. The game is afoot.

Mark Ryder
as Hawker
View All

[Millie Bobby Brown] has been transfixing audiences for three seasons on Netflix's sci-fi smash "Stranger Things," but even to fans of the series, her performance here is a revelation.

I'd like to see a follow-up - only this time, get a real mystery writer involved at the screenplay stage.

At a little more than two hours, "Enola Holmes" may be a tad long, but there are a lot of threads to unravel and it does so more than satisfactorily.

[Millie Bobby Brown] is a delight. She gets to be joyful and she is just radiant, effervescent, and has incredible comic timing.

An ideal work for its target audience, with its positive and affirmational message and the considerable charm of its star.

The Arthur Conan Doyle estate needn't fret over unauthorized cribbing. All that's really left of Holmes here is the name.

Any fan of Sherlock Holmes and detective mysteries will get a kick of out Enola Holmes and Brown's performance.

... extremely entertaining, regardless the messy way it was assembled.

... while I wouldn't say this is an award-caliber film, it moves along at a rapidly pleasing pace and is sure to bring more notice of Ms. Brown's many gifts.

With luck, future installments will have the courage to get weird. If they're also anchored by the star power of Millie Bobby Brown, we'll really have something to look forward to.

There are no featured audience reviews yet. Click the link below to see what others say about Enola Holmes!