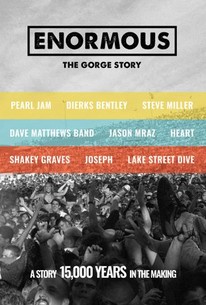 This documentary is about the concert venue called The Gorge built on rural farmland in Grant County, Washington. The film narrates its origins as an amphitheater built adjacent to the Champs de Brionne winery amidst nature views of the Columbia Gorge canyon, the Columbia River, and the Cascade Range. Directed by Nic Davis, the film features interviews with musicians who have come to love performing at this music festival site such as Dave Matthews, Steve Miller, Mike McCready of Pearl Jam, and Jason Mraz, to name a few.

[A] friendly and entirely uncritical documentary...

There are no featured reviews for Enormous: The Gorge Story at this time.