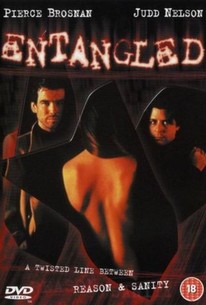 Entangled, directed by Max Fischer, is a confusing, indifferently acted story of fashion-model Annabelle (Laurence Treil) and the men who fall in love with her. In flashbacks, Annabella meets writer David Merkin (Judd Nelson) who writes a novel which she submits anonymously to a competition. David, jealous of Annabella, and aided by his photographer friend, Max (Roy Dupuis), follows Annabella to the chateau belonging to mysterious Patrick Garavan (Pierce Brosnan) where he observes her being photographed in a menage-a-tois. After an accidental murder, several plot twists and a car-crash, the film reaches a confusing, unsatisfying conclusion. Entangled is adapted from the French novel Les Veufs, written by Pierre Boileau and Thomas Narcejac who wrote many celebrated mystery novels. Here, despite all, the plot drags along, until the improbable, highly confusing conclusion, which director Fischer attempts unsuccessfully to explain using flashbacks and a narrative.

Entangled takes about 90 minutes to tell a story that could've easily been told in about 15...

There are no featured reviews for Entangled at this time.