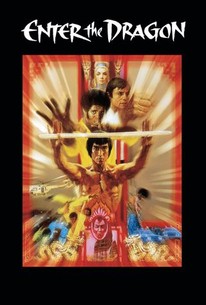 Critics Consensus: Badass to the max, Enter the Dragon is the ultimate kung-fu movie and fitting (if untimely) Bruce Lee swan song.

Critics Consensus: Badass to the max, Enter the Dragon is the ultimate kung-fu movie and fitting (if untimely) Bruce Lee swan song.

Critic Consensus: Badass to the max, Enter the Dragon is the ultimate kung-fu movie and fitting (if untimely) Bruce Lee swan song.

One of the most popular kung fu films ever, and perhaps the peak of the famed Bruce Lee's career, Enter the Dragon achieved success by presenting a series of superbly staged fighting sequences with a minimum of distractions. The story finds Lee as a martial-arts expert determined to help capture the narcotics dealer whose gang was responsible for his sister's death. This evil villain operates from a fortified island manned by a team of crack martial artists, who also host a kung fu competition. Lee uses his skills to enter the contest and then tries to chop, kick, and otherwise fight his way into the dealer's headquarter. The story is, of course, merely an excuse for showdown after showdown, featuring masterly fighting by Lee in a wide variety of martial arts styles. Essential viewing for martial arts fans, the film was also embraced by a larger audience, thanks to a fast pace and higher-than-usual production values. ~ Judd Blaise, Rovi

Critic Reviews for Enter the Dragon

A whoop-and-holler entertainment, which is to say that it's a lavish, corny action movie, not boring for a second and as outrageously wry as it is visually appealing.

Director Robert Clouse works the material for efficiency and optimum thrill, while providing a buoyant visual style to the action.

Enter the Dragon is the first classy Kung Fu movie specially designed for Western audiences, and that's not to be confused with first-class.

The only real disappointment about Enter the Dragon is that it is Bruce Lee's last movie.

Rising popularity of the Chinese martial arts as screen entertainment climaxes in fine crescendo in this violence-drenched actioner.

Lee wanted to ensure that Enter the Dragon was not just a banal Hollywood production that exploited kung fu for action thrills, but was rather a vehicle for both himself as a performer and his philosophical worldview

Lee is at his charismatic best in this spy thriller wrapped up in a martial arts tournament hosted by an evil overlord. It's a film I could rewatch perhaps every other week.

The fact that Lee has to share screentime with two other battlers continues to minimize his impressiveness - especially when it comes to Saxon, who is quite unconvincing.

Although it features all the period trappings of misogynist tendencies evidenced in the film's closest cousins, the rampant exploitation films of the 1970s, the formidable kung-fu sequences are the greatest feature.

Iconic and record shattering in every way, there's no doubt that Enter The Dragon is the film most Bruce Lee fans immediately associate with him and which largely introduced him as a superstar and cultural icon in the western world.

Audience Reviews for Enter the Dragon

The quintessential Kung-Fu action flick that made Bruce Lee an international star. Despite being a tad dated, this is still a fantastic action movie through and through. It's well-directed, the music by Lalo Schifrin is great, and the action is fast and well-choreographed. All three of the main leads are also great (Bruce Lee, John Saxon, Jim Kelly).

In the film's opening flashback scenes, when the star, Bruce Lee, is told of his sister's murder, even a total lamebrain (like say, f'instance, me) understands that a total macho-on-steroids asskicking lollapalooza is on its way (and the soul of kung fu stands represented as essentially a poor man's revenge against injustice - thus the ghetto appeal). With an truly exotic locale, China, and a cast of kung fu asskickers one after another its a wonder this work hasn't been more imitated --- if anyone could replicate Lee's asskicking charisma. Did I say "asskicking" 3 times? No. More.

Bruce Lee vs. Chuck Norris. Even today the world's not ready for the epic-ness of this film.