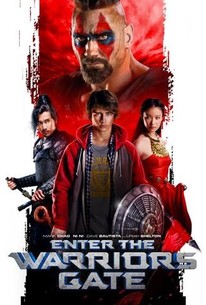 Epic fantasy-adventure meets martial arts action in this thrilling film written by Luc Besson & Robert Mark Kamen. After a mysterious chest opens a gateway through time, teen gamer Jack (Uriah Shelton) is transported to an ancient empire terrorized by a cruel barbarian king (former WWE superstar Dave Bautista). Jack will need all of his gaming skills as he battles to defeat the barbarian, protect a beautiful princess, and somehow find his way back home.

Guardians of the Galaxy Vol. 2 Is Certified Fresh

There are few moments in Warrior's Gate that seasoned viewers will not recognize for what they are the minute they happen.

Next time you accidentally stumble into a portal to a different dimension, you'll be glad you saw it.

Hoene and Besson haven't constructed as tight a story as Steven Spielberg and his many protegees usually did, but they have nailed the feeling of a boy who could be a hero, if just for one day.

Lumbering and unfunny, the feature is aimed at 10 year olds and perhaps nobody else.

Fist bumps, break-dances, beat-boxing and slang are spat out incessantly but may alienate older viewers TWG is trying to win with its 80s movie references.

a bilingual blend... of The Karate Kid, Monty Python And The Holy Grail, and fantasy-fu. It is all very good-natured, but this wish fulfilment tale of adolescent empowerment is clearly aimed at viewers of Jack's age

Director Matthias Hoene's The Warrior's Gate plays like a relic from a bygone era, when broad Asian stereotypes were commonplace and went largely unchecked.

Finally I am able to finish watching the last movie from last week's debacle. This will never happen again, until it does. I believe I have made it clear, in one of my previous reviews, that I've played video games almost my entire life. They are among my favorite hobbies, if not my favorite one. I've owned so many gaming consoles and bought (or at least my mom bought most of them for me in my youth) so many games that I don't even know what to do with them anymore. As far as video game adaptations or movies with video games as part of their plot, let's just say that they haven't yet hit their stride. In fact, you could argue that man of these movies are absolutely horrid. The only movie you could say that's great is Wreck-it Ralph and that movie is inspired by video games as a whole. It's not like an Assassin's Creed, which adapts an already established story. I don't really know where I'm going with this or why I started out with this, since the video game stuff comprises, maybe, 10% of the whole movie and maybe even less. But you know the drill here, the lead character (who loves video games) is a bullied geek who can't defend himself, a virgin and hasn't kissed a girl yet. Typical, but that's the way they wanted to tell their story. It's a stupid way to tell it, yes, but that's the story they wanted to tell. This is very much a retread of the Forbidden Kingdom. In that movie, a skinny white boy who's a massive martial arts film buff, finds himself transported to ancient China, where he is forced to learn to be better at martial arts than the actual experts in record time and save the locals from nefarious villains. That pretty much describes this movie right down to a T. And don't even get me started on the whole white savior angle, which is another thing entirely. I'm not gonna focus on that in this review, at least that's what I'm hoping for. I'll be straight up with you, I wasn't really expecting much from this. My hopes/expectations are instantly diminished the second I see a movie like this. Because I know the characters will be complete and utter stereotypes (which this lead was) and the characters will be one-dimensional (which these characters were). With that said, while this is a B-movie as they come, I didn't find this to be too bad at all. I'll be honest, I thought the modern day stuff, prior to Jack being transported to ancient China, was just downright awful. It was really bad, with Jack having to babysit the princess and the cultural changes, it was really fucking lame. Once they do get to ancient China and things start to settle down, this turns into a perfectly decent and watchable movie. Not anything that anyone is ever gonna remember after they finish watching it. I think it's the type of movie that, if you also watched The Forbidden Kingdom, you'll very easily mistake parts of one for the other and vice versa. Their DNA is practically similar, with only minor changes in characters and story. The story is what you would expect, Jack has to help these people overcome this tyrannical ruler (Arun the Cruel). This set-up is absolutely fucking ridiculous, since there's this wizard character in the film who conjures up fucking magic spells. You mean to tell me that this wizard can't come up with something to defeat Arun, but Jack, who weighs 110 pounds soaking wet and with no martial arts experience, is somehow the chosen one to defeat Arun. I know suspension of disbelief is key in flicks like this, but even I have my limits. Having said that, I do believe I was able to play along with the movie and its ridiculous hero. Like I said, the movie is a B-level affair through and through. So don't expect the best acting (it's cringe-worthy in some scenes) or great CG when they do use it. Even with that, however, the characters sort of grew on you. They were likable enough and this doesn't take itself too seriously, so you're able to laugh at it as well. I don't really know what else I can say, really. There's no denying that the effort wasn't there to make this a high-quality flick. This was meant to be a second-tier movie through and through. If you're able to look at it that way, even with its numerous flaws, you might get some enjoyment out of it. I can't recommend it, but there's so many gaming-inspired movies out there that this being barely a blip on that radar is about the best compliment I can give it. Not what I would call good, so I wouldn't recommend it, but it's watchable enough if you got a couple of hours to kill.