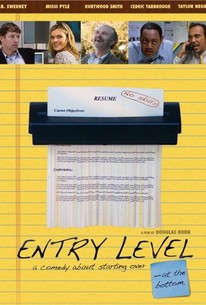 An ambitious chef and restaurateur discovers that starting over is never easy after seeing his dreams dashed and being forced to work his way up the corporate ladder despite having no discernable job skills. Clay Maguire (D.B. Sweeney) never had any doubts about what he wanted to do with his life. After losing his restaurant, however, Clay realizes that in order to remain afloat he'll have to venture out into corporate America and hope for the best. Unfortunately Clay is pushing forty, and isn't exactly proficient in such common computer programs as Microsoft Word and Excel. Clay has officially entered the ranks of the Unemployable Interviewees of America, but thankfully he's not alone; while his cynical job counselor (Cedric Yarbrough) may offer little encouragement, his homeless pal Nick (Kurtwood Smith and pretty former Peace Corps volunteer Liz (Missi Pyle) both do their best to lift Clay's spirits while everyone struggles just to get by. Taylor Negron and Steve Ryan co-star.

There are no critic reviews yet for Entry Level. Keep checking Rotten Tomatoes for updates!

This movie really suprised me that it was better then I thought it was gonna be.It had a great cast & a great ending.Sometimes theres gold at the end of the rainbow

Lame. I am usually a fan of Independent films, but this one was just so uninteresting and seemed to lack something.