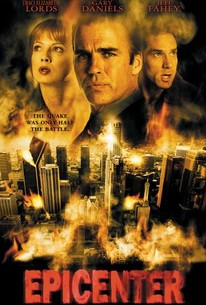 An attractive female FBI agent is transporting an industrial spy to a California prison. He is attracted to her, but complications set in when, upon landing, a massive earthquake strikes. Now the two must help each other to save the agent's daughter, keep hit men from assassinating the criminal, and survive the devastation caused by the quake. This combination disaster film/thriller was directed by Richard Peppin and stars Jeff Fahey and Traci Lords.

There are no critic reviews yet for Epicenter. Keep checking Rotten Tomatoes for updates!

There are no featured audience reviews yet. Click the link below to see what others say about Epicenter!