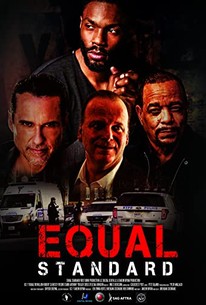 An NYPD Detective is shot by one of his own, benevolent brothers in uniform. Communities are ignited - to march for justice. Gangs put their differences aside - for a united fight, an equal opportunity. "That people not be judged by the color of their skin but for the content of their character." The movement and unity impacts City society and leads to a Blue Wall intervention within the Police force. White cops lust for change and act on it - by flushing out racism. Not an easy fight. In the end, what was considered impossible, became possible.

"Equal Standard" sadly exhibits a consistent lack of restraint while the story widens its scope and stakes, falling notably short of its well-intentioned ambitions to honor multiple viewpoints amid rising racial tensions.

Poorly paced and awkwardly written, Equal Standard brings little value to the issue of racism and the law.

Relevant themes and Truvillion's stand-out performance rescue this drama from preachy dialogue and oversimplification of the tensions between Black communities and law enforcement.

Director Brendan Kyle Cochrane gets a lot out of the New York environments, and goes with a naturalistic approach to the material.

There are no featured reviews for Equal Standard at this time.