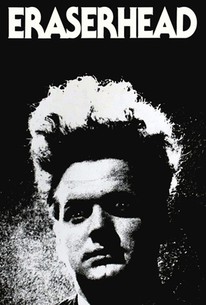 Critics Consensus: David Lynch's surreal Eraserhead uses detailed visuals and a creepy score to create a bizarre and disturbing look into a man's fear of parenthood.

Critics Consensus: David Lynch's surreal Eraserhead uses detailed visuals and a creepy score to create a bizarre and disturbing look into a man's fear of parenthood.

Critic Consensus: David Lynch's surreal Eraserhead uses detailed visuals and a creepy score to create a bizarre and disturbing look into a man's fear of parenthood.

This surreal nightmare examines male paranoia. Our hero and title character, Henry, faces a number of horrifying obstacles in meeting someone of the opposite sex, meeting her parents, and procreating. Produced during a one-and-a-half-year period while director David Lynch was a student at the American Film Institute, the film launched him as a major new talent admired by cinephiles and filmmakers all over the world. It stands today as a milestone in personal, independent filmmaking.

Judith Anna Roberts
as Beautiful Girl Across the Hall

Laurel Near
as Lady in the Radiator

Jack Fisk
as Man In The Planet

Thomas Coulson
as The Boy

Neil Moran
as The Boss

Peggy Lynch
as Person Digging in the Alley

Doddie Keeler
as Person Digging in the Alley

Gill Dennis
as Man with Cigar

It's beautiful and strange, with its profoundly disturbing ambient sound design of industrial groaning, as if filmed inside some collapsing factory or gigantic dying organism.

What makes Eraserhead great -- and still, perhaps the best of all Lynch's films? Intensity. Nightmare clarity. And perhaps also it's the single-mindedness of its vision.

David Lynch has "cleaned up" his freaky feature debut, but don't worry - it's still an amazing industrial nightmare.

David Lynch's 1977 feature debut Eraserhead is one of those rare films that really deserves its cult status - a nightmarish, heavily symbolic story set in a postapocalyptic future.

The king of midnight movies.

An unparalleled film of strange beauty, Eraserhead might be one of the most perfect demonstrations of the power of film as a medium and an artistic achievement.

Those black and white images stay with you; ingrained deeply in your soul.

A hallucinatory drama with impeccable technique and exemplary cinematography. [Full Review in Spanish]

German Expressionism meets grindhouse schlock, Eraserhead is a student film-turned-cult classic that probably would've been better as a 20-minute short.

"In heaven, everything is fine," but in Eraserhead (1977) nothing is fine. David Lynch's debut feature is grim, disturbed, mutated, claustrophobic, a world that appears to be unraveling-or, more accurately, decaying-before our eyes.

Oh, what an atmosphere!

I just don't get it!