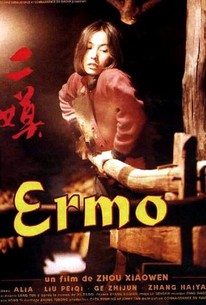 A satire of the influence of Western values and ideals on Eastern culture, Chinese director Zhou Xiaowen's Ermo stars actress Ailiya as its titular heroine, a beautiful middle-aged wife and mother who undertakes an obsessive struggle to earn enough money to buy her family a television. In a dreary, remote Chinese village, miles away from anything smacking of the modern, Ermo lives with her son Huzi (Yan Zhenguo) and her husband (Ge Zhijun) -- a lazy, whiny, and impotent man who spends his time drinking medicine that he hopes will restore his virility. After traveling to the nearest town to sell the noodles that she makes, she spies a large television set in a department-store window and becomes obsessed with the notion of purchasing the biggest TV in the community in order to earn a spot of honor and envy on the social ladder. Sadly, she becomes increasingly sucked into the vacuum of capitalism, ultimately finding herself an object of mass consumption as well.

There are no critic reviews yet for Ermo. Keep checking Rotten Tomatoes for updates!

There are no featured audience reviews yet. Click the link below to see what others say about Ermo!