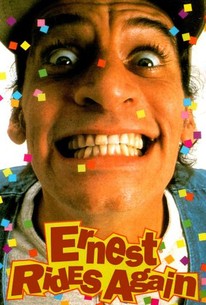 Ernest P. Worrell (Jim Varney) inadvertently finds the long-missing British crown jewels (the tower of London contains fake jewels, according to the film) after he stumbles over a half-buried cannon from the Revolutionary War on the campus of the university where he works. This dim-bulbed comedy (the fifth in the Ernest film series) chronicles his bungling adventures.

The fifth in the series of slapstick comedies about Ernest P. Worrell (Jim Varney) will please his fans but is unlikely to convince anyone else as to it merits.

A return to the goofy and familiar, Vern!

The best non-Disney Ernest movie, and a fun ride no matter what stuffy elitists would have you believe

You may have forgotten just how grating and irritating Jim Varney's incessant mugging as Ernest P. Worrell can be. If that's the case, here's Ernest Rides Again to remind you.

Story is super thin and only a handful of jokes are funny. It's a shame the character was so poorly written as Varney was really great in the lead role. Much like Peter Sellers the formula for the films grew tiring for the audience. Not the bomb Ernest goes to prison was but not far behind it.

Everyone's favorite handyman, Ernest P. Worrell, continues his misadventures in Ernest Rides Again. When an unorthodox college professor advances an unconventional theory about the Revolutionary War, Ernest attempts to help him out by finding a fabled colonial cannon called Goliath. The production values are quite poor and the performances aren't much better. Still, the film delivers a few laughs (intentional and otherwise), and there's some excitement to the pursuit of the cannon. Mildly entertaining, Ernest Rides Again is alright for kids (but there's not much here for anyone else).

Move over Indiana Jones. Here comes Ernest P. Worrell, our underdog hero. Let me start out by saying this: 'Critics-Schmitics'. Don't let the nay saying critics and reviewers dissuade you from picking up this classic movie. No disrespect, but they obviously don't have a humorous bone in their bodies and don't know how to remove the stick from their butts. I love the Ernest genre and can be biased about Jim Varney but even if I didn't like some of the other Ernest movies, this is a true gem. Listen to me and listen to the critic, Luke Y. Thompson. This was very well written and very well acted and consistent. The opening song is wonderful and describes Ernest to a T. You've got a 5 ton historical cannon named, "Goliath", lots of gun fire, a healthy dose of slapstick by the master himself, Varney, who voices a plethora of characters in top notch form. You have Dr. Abner Melon(Ron James and the 'Vern' of the movie), a meek history professor who is uptight, but thanks to Ernest, learns to loosen up and enjoy an adventure. There is Nan Melon(Linda Kash), Abner's annoying, and overbearing wife and two pesky salesman that finish each other's sentences with perfect timing. Tom Butler(Dr. Radnor T. Glencliff), who has played in various Lifetime movies as a lawyer and all around 'good guy', has the villainous role in this one and is great. He will stop at nothing, even to the point of killing Ernest to get at 'Goliath' and the crown jewels. Comedy ensues as Ernest is the one to find 'Goliath' and takes it for a wild ride everywhere a cannon should not be going. Varney and James play well off each other and this movie couldn't have been cast any better. But unlike some of the other Ernest movies, Ernest seems to have a higher intellect in this one while still being that lovable hayseed we all know. Even if you're not a big fan of the Ernest genre, I urge you to give this one a chance and form your own opinions because, unlike the reviews of some critics, this movie definitely has merit. Not only did Varney bring back slapstick, he did it even better and was/is still one of the best at this brand of humor. As with all Ernest movies, this is free of vulgarity and filth but still a great ride, 'KnoWhutImean?'

This Ernest movie had a good plot, I will give it that. It was an interesting and fun concept to follow and had some cheesy but funny comical parts too it. Negatives: Power tools that seemed to be alive, a cannon that drove miles in every direction, ernest having a rock hard head that bends nails. There were some moments in this movie that was just to far out to enjoy. I think the writers could of kept it comical simply through the talent of Jim Varney but they stretched it a little bit and took from the movie with some of these extra parts that was not funny nor entertaining. Overall the movie is a decent watch. I would not spend above $5 bucks on it but it's a fun film to just sit down by yourself or some kids and laugh a little.