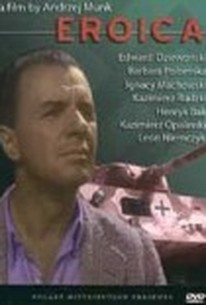 This comedy-drama from director Andrzej Munk tells two stories of life in Poland during World War II. In "Scherzo Alla Pollaca," a man trying to worm his way out of military service goes underground,and begins working the black market to support his family. He unwittingly becomes involved with the Polish Resistance, and in time he becomes a brave and valued member of the rebel forces, whose will to survive proves to be a greater asset than many soldiers' ideal of self-sacrifice. The second segment, "Ostinato Lugubre," is set in a Nazi concentration camp; one inmate decides that he can no longer stand to be confined and makes a brave if foolhardy attempt to escape. While no one is sure if the man actually made it out, his absence troubles the guards and provides a sense of hope and inspiration for the other prisoners. Eroica was the winner of the FIPRESCI Award at the 1959 Mar Del Plata Film Festival. ~ Mark Deming, Rovi

It's the work of a deep thinker sardonically reflecting on the insanity of war and the human condition.

There are no featured reviews for Eroica at this time.