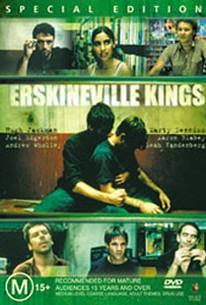 Australian director Alan White creates this bleak but gorgeously photographed urban drama about life in Sydney's seedy inner suburbs. Hoping to escape his dad's drunken and abusive behavior, Barky runs away from home to cut cane in the north of the country. Two years later, he returns to his down-and-out hometown to attend the funeral of his father and to make amends with his brother Wace, with whom he had a falling-out. As he meets up with old friends and his ex-girlfriend Lanny, Barky reveals more and more about the enigmatic workings of his mind and the grim circumstances of his upbringing. Shot on a very low budget, the film nonetheless creates a compelling portrait of this gritty, oppressive land. Erskineville Kings was screened at the 1999 Montreal Film Festival. ~ Jonathan Crow, Rovi

Mercia Deane-Johns
as Barmaid
View All

There are no critic reviews yet for Erskineville Kings. Keep checking Rotten Tomatoes for updates!

Hugh Jackman is very strong in the film and saves what grows into a very overly dramatic film. The filmmaking team don't have a lot of convincing characters or depth to carry the film for the duration and it's a bit performance based. I have wanted to watch this film for years, believing it was an indie great, but sadly it underdelivered for me. Jackman clearly outshines the others, his presence is intense and he carries every scene. The film grows stronger but the early sections of the film are a little hit and miss for me, you don't have a very clear reason about the hatred for the dad. They play one scene with loud whips, which is like a comedy and it demonstrates a lapse with the filmmaker. There is a lot of talent in the film, but not used correctly. 09/04/2019