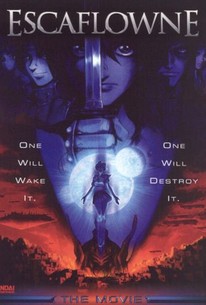 In this animé feature based on the popular Japanese television series, Hitomi is a high school student who is trying to come to terms with a severe case of depression. When her spirits are at their lowest, Hitomi makes a psychic connection with Van, the young king of the nation of Gaia, located on another planet visible in the night sky of Earth. Gaia has been brought to the brink of war by the evil Black Dragon Clan, and, while the nearby nation of Abaharaki wishes to form an alliance with Gaia for their mutual protection, Van is a leader who prefers to act on his own. Hitomi finds herself transported to Gaia, where she becomes a valuable if unlikely ally to Van; as the Black Dragon Clan advances, Van discovers that Hitomi may hold the key to the magical dragon armor of Escaflowne, the weapon that would make Gaia invincible. Escaflowne (also advertised as Escaflowne the Movie: A Girl in Gaia) features Kelly Sheridan as the voice of Hitomi; the voice cast for the American release version also includes Kirby Morrow, Brian Drummond, and Paul Dobson.

Critic Reviews for Escaflowne: The Movie

Its ambitiousness and artistry should satisfy discriminating fans of the anime genre.

A visual spectacle full of stunning images and effects.

A combination of standard, stiff TV-style animation and snazzy-looking digital effects that do little to disguise the fact that the characters barely move.

A fan film that for the uninitiated plays better on video with the sound turned down.

It is just too bad the film's story does not live up to its style.

Even die-hard fans of Japanese animation ... will find this one a challenge.

The idea of an ordinary slacker kid being a savior for another world may not be anything new, but Escaflowne literally gives it a new paint job.

Typical animé, with cheapo animation (like Saturday morning TV in the '60s), a complex sword-and-sorcery plot and characters who all have big round eyes and Japanese names.

Audience Reviews for Escaflowne: The Movie

Loved the ending to the OVA but still enjoyed the film, although Folken killed in the way he was just didn't do it for me...

This is a retelling of the anime of the same name, but is sooooo much better. I ~loved~ the ending.