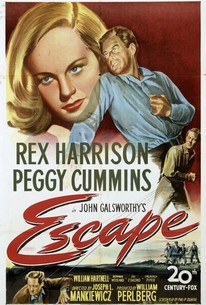 In this drama, set after the war, a WW II flying ace and hero comes to the aid of a hooker who is being harassed by a policeman. He pushes the abusive cop away during the tussle; the cop falls, hits his head, and dies. The former flier is promptly tried and given a three-year prison sentence. He escapes one night during a heavy fog. He is taken in by a caring woman who tries convincing him to surrender. The fugitive at first refuses, but then after seeking sanctuary in a church relents because he does not want the parson to have to lie on his behalf. His surrender is made easier by the knowledge that the woman will wait for him.

Cyril Smith
as Policeman
View All

There are no featured reviews for Escape at this time.