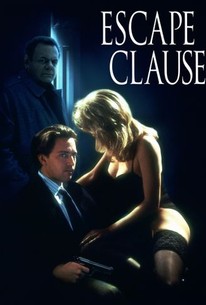 This suspenseful thriller originally aired on the Showtime cable network. Successful insurance executive Richard Ramsay has had a pretty good life until the day he is called by a paid assassin and informed that his wife is planning to have him killed. The hitman then makes Richard a most unusual offer. Later both the assassin and the faithless wife are found dead. Naturally Richard becomes the prime suspect of Detective Ferrand's investigation, but Richard is innocent and so sets off on his own investigation, one that leads him on serpentine trail of grim surprises.

There are no critic reviews yet for Escape Clause. Keep checking Rotten Tomatoes for updates!

There are no featured audience reviews yet. Click the link below to see what others say about Escape Clause!