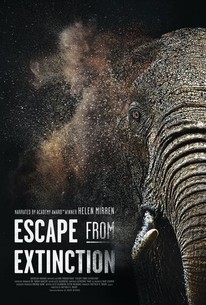 Helen Mirren narrates director Matthew R. Brady's urgent documentary on the contemporary phenomenon that scientists are describing as the 'Sixth Mass Extinction.' Using vivid footage of endangered animal species (across all seven continents and the world's major water bodies) and interviews with leading conservation and animal welfare experts, it explores the critical work of organizations that stand on the frontlines in the battle to stop one million species from becoming extinct.

Critic Reviews for Escape from Extinction

Already in the grip of this crisis, animals - and us - deserve better than this partial survey.

Even with such criticisms, this is a movie about one of the most important issues of our lifetime...

This film may shed significant insight into zoological conservation efforts, but there is never any question of which institutions benefit the most from its version of history.

A timely documentary which makes the case for the effectiveness of human intervention, both in increasing the numbers of engendered creatures and educating the public.

A film can make a plethora of valid and important points and still clumsily and forcefully push an agenda at the same time.

Soundly counters the anti-zoo protest movement with a cascade of facts, figures and pretty pictures.

With golden-throated eloquence, Helen Mirren narrates a documentary that sounds the alarm over a billion animals dying in Australia's fires.

There are no featured reviews for Escape from Extinction at this time.