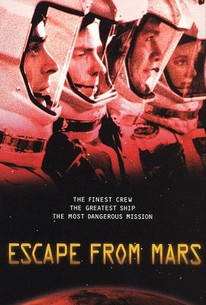 In this futuristic science fiction adventure, Commanders Lia Poirer (Christine Elise) and John Rank (Peter Outerbridge) supervise a crew of three -- Bill Malone (Michael Shanks), Andrea Singer (Allison Hossack) and Gail McConnell (Julie Khaner) -- as they set off on the first manned voyage to the planet Mars. However, once the crew has left Earth's orbit, they discover that not all is as it should be; attempts to bring the project in under budget have left them with inferior and unsuitable equipment, and when they land on the Red Planet, they discover that no one made provisions for the frequent meteor showers. Soon, the crew (who have personal problems of their own to contend with) have to put aside their differences and work together if they are to survive the forbidding Martian terrain and map out a way to return to Earth.

Critic Reviews for Escape from Mars

A 90-minute afterschool special with a 'cool' sci-fi wash.

There are no featured reviews for Escape from Mars at this time.