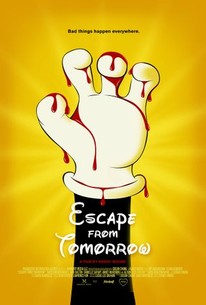 Critics Consensus: Conceptually audacious but only intermittently successful in execution, Escape From Tomorrow is nonetheless visually inventive and darkly surreal.

Critics Consensus: Conceptually audacious but only intermittently successful in execution, Escape From Tomorrow is nonetheless visually inventive and darkly surreal.

Critic Consensus: Conceptually audacious but only intermittently successful in execution, Escape From Tomorrow is nonetheless visually inventive and darkly surreal.

The most provocative film from the 2013 Sundance Film Festival, ESCAPE FROM TOMORROW should not exist, and yet it does. Like nothing you've ever seen, Randy Moore's directorial debut is a bold and ingenious trip into the happiest place on earth. An epic battle begins when a middle-aged American husband and father of two learns that he has lost his job. Keeping the news from his nagging wife and wound-up children, he packs up the family and embarks on a full day of park hopping amid enchanted castles and fairytale princesses. Soon, the manufactured mirth of the fantasy land around him begins to haunt his subconscious. An idyllic family vacation quickly unravels into a surrealist nightmare of paranoid visions, bizarre encounters, and an obsessive pursuit of a pair of sexy teenage Parisians. Chillingly shot in black and white, ESCAPE FROM TOMORROW dissects the mythology of artificial perfection while subversively attacking our culture's obsession with mass entertainment.(c) FilmBuff

Alison Lees-Taylor
as The Other Woman

Stass Klassen
as The Scientist

Amy Lucas
as The Nurse

Lee Armstrong
as Man on Scooter

Jakob Salvati
as Other Woman's Son

Justin Shilton
as Father in Bathroom

Zach Pierce
as Son in Bathroom

Marcell Rentemeister
as Base 21 Guard

Noa Geller
as Base 21 Guard

Trevor McCune
as Valet
View All

News & Interviews for Escape From Tomorrow

View All Escape From Tomorrow News

Critic Reviews for Escape From Tomorrow

It feels much like a theme park itself -- really exciting at first, but then your senses are dulled, and eventually you just want to go.

Suggests an R-rated Twilight Zone episode with a twist of Fellini-lite, in a trite film school kind of way.

It's really just a middling fantasy about a middle-aged dad having a meltdown during a family vacation to the Magic Kingdom, with a few scattered sci-fi and horror elements thrown in.

That Moore is able to take Disney's own product and twist it into a disturbing, perverse, satire with very little tampering is remarkable in its own right.

The effects-heavy movie flies off into exotic yet inconsequential science-fiction visions; Moore's view of the macabre in the banal is a tepid successor to David Lynch's.

This is a film that you really want to pay close attention to and you want to watch with someone who appreciates a strange film.

Escape from Tomorrow is a magical journey into the nightmare that is adulthood.

Taking the Mickey out of Disney's rose-tinted worldview, while also offering a rollercoaster ride through the psyche of a man losing his head, Moore's film paints a trippy picture of misery repressed & mortality sanitised. It's an astonishing debut.

A messy, unfocused conglomeration of concepts that is hampered not only by the limitations under which it was shot, but by its fatal lack of cohesion.

Escape From Tomorrow employs a neo-noir look by having the film in black and white, which also aids the horrifyingly dark look of the self-proclaimed paradise.

Escape from Tomorrow might be a bit too sardonic and extreme for some, but it is nonetheless a brave, unique and unforgettable experience.

Audience Reviews for Escape From Tomorrow

It's almost like The Shining, but instead of a hotel, is Disneyland. A truly audacious and provocative film (maybe the first film to do so in a such powerful way in a long time and that might take another long time do see other effort like these), bringing a surreal and darkly humour and series of odd/creepy scenes. Sometimes the movie shows a poor chroma key in daylight, it's censure itself and bring in one scene an (probably) involuntary comedy. Escape From Tomorrow is an unique ride by Guerrilla Cinema, surreal creepy horror-fantasy, B-Movies, mad scientist pictures, Disney characters and the list continues without stop. Also very bold for bring the name Disney and Siemens as part of an evil plan. Randy Moore made what a lot of people call "The movie that in any logical reason should exist!" (With this phase of course is a picture that you must see) and probably the also called "The ultimate guerrilla film". Actually, I would give a three and half stars, but for being so goddamn audaciously bold and for being the first 'Disney movie' (without being MADE by Disney, but involve it) that I like in a really long time, I would give four stars. Walt Disney actually would enjoy Escape From Tomorrow, because the company that he create made really worst things in the last years, that an unauthorized cult horror independent film. This is a true MUST SEE. Fresh.

Shot guerrilla-style at Disney World, this surreal satire follows the midlife crisis of Jim, whose anxieties over his job and family problems mutate into vivid theme park hallucinations involving him being imprisoned by a mad scientist in a secret room beneath Epcot center and encountering a real life wicked witch in her hotel room. In some ways this is one of those ideas that sounds better on paper, but it raises a host of fascinating issues, from its in-movie themes of imagination and escapism to external questions about filmmaking methods and ethics.

'Escape From Tomorrow'. An overtly sexualised mid-life crisis through the mind of a bored man. Admire how it was filmed. The result, /shrug

Escape from Tomorrow sounds like an interesting curiosity and it is. Unfortunately the back-story of how the picture was created is more fascinating than the film itself. The problem is this fantasy really doesn't go anywhere interesting. The downward spiral of the tale is sort of a hallucinogenic head trip - but it's incoherent. There's a buried subtle critique that even Disney World's sunny happy facade can't mask true depression. But this has more to do with negativity in this family's life than a comment on the actual merits of the park itself. For most of the drama I was intrigued where the chronicle would go. Then the movie takes a particularly nasty turn 10 min from the end that dares the audience to keep watching. It devolves into a scatological creepshow. Shame because with some judicious editing and more intellectual mindset, this could've been a perceptive commentary on the artificiality of the happiest place on earth. After screening at the Sundance Film Festival, there was some speculation that future audiences would never see Escape from Tomorrow because of legal difficulties. The work most likely falls under the fair-use doctrine as parody and therefore not subject to copyright law. Whatever the reason, Disney has decided to ignore the production so as not to bring more attention to it. You should probably do the same. fastfilmreviews.wordpress.com