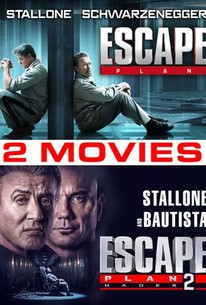 In this double feature, prosecutor turned professional escape artist, Ray Breslin, is tasked with breaking out of the world's most secure prison by posing as an inmate. However, he soon realizes he's been set-up and must employ the help of a fellow inmate to break-out for real. In the sequel, Breslin's partner goes missing and turns up in a ruthless prison called Hades. Now, he must go undercover in order to save his friend from a life in lock-up.

Baylee Curran
as Alice
View All

There are no critic reviews yet for Escape Plan 2 (Double Feature with Escape Plan). Keep checking Rotten Tomatoes for updates!

There are no featured reviews for Escape Plan 2 (Double Feature with Escape Plan) at this time.