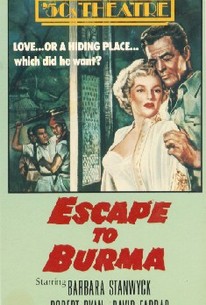 In this production from Benedict Bogeaus and RKO Radio, Robert Ryan stars as a fugitive from justice who hides out in the Far Eastern teak plantation managed by Barbara Stanwyck. As the two fall in love, Stanwyck comes to believe in Ryan's innocence. Upon the arrival of doggedly determined security officer David Farrar, Ryan and Stanwyck escape into the treacherous Burmese jungles. Like many of Bogeaus's productions of the 1950s, Escape to Burma was directed by Allan Dwan.

Roger
as The Leopard

Critic Reviews for Escape to Burma

A corny jungle epic, involving Robert Ryan and Barbara Stanwyck, who has a way with elephants...

Audience Reviews for Escape to Burma

Routine jungle adventure elevated somewhat by two great stars but not nearly the best that either of them appeared in.

Always thought Barbara Stanwyck might just be a slight bit gay, as she always seems to wear the tight pants short hair same ole same ole role and this film even convinces me more. My word, what a lot of old tosh this is. Barbara Stanwyck, languishing deep in the Burmese jungles with just a bunch of superstitious natives and a herd of old elephants for company, finds herself playing hostess to a fugitive Robert Ryan. Ryan's on the run from a dour David Farrar who is convinced he murdered the local rajah's son. Of course it's not long before Stanwyck's swooning in Ryan's arms - that leisurely once-over she gives him when they first meet leaves us in no doubt as to where their relationship will lead, and although Farrar is on the side of the law, he's essentially the bad guy because - guess what? - Ryan didn't kill the Rajah's boy after all! Well, actually he did, but it was a sort of mercy killing, so it doesn't count. Stanwyck's still looked in pretty good shape here - although she doesn't look quite so good when standing next to her young native girl servant if you know what I mean. The decent work must have been running out for her by then though, because although the story is reasonably entertaining, the dialogue is almost laughable - especially in the first few minutes when Stanwyck is looking over her rag-tag legion of elephants. Early on, she's portrayed as this strong, independent woman, off hunting a tiger to ease the natives' nerves, but instead of shooting the tiger she falls over and has to be rescued by big butch Bob and after that she just melts. 4 1/2 stars 1-4-13