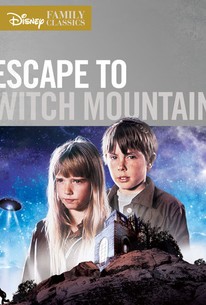 This fast-paced Disney endeavor stars Kim Richards and Ike Eisenmann as two adolescents with acute psychic powers. The kids are actually space aliens, but suffer from amnesia and are unaware of their origins. Pursued by greedy business-mogul Ray Milland, who wants to harness their special powers for his benefit, Kim and Ike are rescued by likeable camper Eddie Albert. He and the kids escape to the mountain of the title when Albert's RV suddenly acquires the power of flight. In 1978, the film spawned the sequel Return from Witch Mountain. ~ Hal Erickson, Rovi

Alfred Rossi
as Policeman No. 3

Tony Giorgio
as Hunter
View All

Pleasant enough, but underwhelming, and curiously lacking in wonder, even in the high-flying finale.

A Disney adventure with quite a lot going for it, even if it does end up spreading itself too wide for the sakes of the entire family.

A Walt Disney production for children who will watch absolutely anything that moves.

A scifi thriller that's fun, that's cheerfully implausible, that's scary but not too scary, and it works.

One of Disney's best and most popular live-action movies, this one is a favorite among those who grow up in the Seventies.

I really enjoyed it. I was involved with the story from the very beginning. The child actors felt like real kids to me

provides adventure and excitement that children of all ages can enjoy, but it is not very perilous or violent at all

The movie looks pretty cheap, but with Ray Milland and Donald Pleasance as villains, it's still a lot of fun.

I didn't feel its magic.

If you can dust off your eight-year-old self and put your disbelief in a headlock when you pop this in the player, you may manage to get a few nostalgic kicks.

This is an okay kids movie, I saw it a long time ago when I was a kid, and I thought it was just okay then too. Maybe I should see it again someday?

Children with psychic abilities journey to discover their origins. Pleasant escapist children's fantasy is pure nostalgia for any adult who saw this movie in their youth.

One of my favorites growing up.