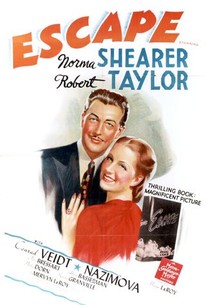 Based on a novel by Ethel Vance, Escape stars Robert Taylor as a young American, the son of a widowed European woman (Alla Nazimova). The mother has been imprisoned in a German concentration camp, compelling her son to ignore America's neutrality and attempt a rescue. Sneaking into German-occupied Europe, Taylor is befriended by a countess (Norma Shearer) who is the mistress of a Nazi general (Conrad Veidt). Taylor isn't certain of the countess' loyalties, but she proves herself by aiding in the rescue of the imprisoned woman. Escape is distinguished by a surprisingly subtle performance from Norma Shearer, though she gives in to her tendency to "ham" in her final denunciation of her Nazi paramour.

Lisa Golm
as Anne
View All

The film effectively proves the following: (1) Conrad Veidt is one of the world's finest actors; (2) Robert Taylor is industriously learning how to act.

The picture is of a convincing realism. [Full review in Spanish]

A fine overlooked film one of Norma Shearer's last and best. Studio bound but still an interesting story. Bonita Granville plays her part as a vicious and evil little viper well.