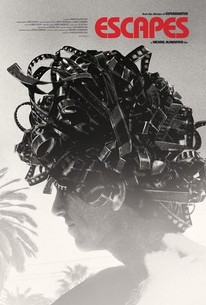 Be it divine intervention or just pure dumb luck, Fancher never lost his foothold on the fringes of cinema. He lived his life as if it was a movie waiting to be made.

A half-dozen true Hollywood stories are presented in "Escapes," all offered in a matter-of-fact style that seems detached from typical celebrity brand-building and false humility.

"Escapes" is as unconventional as its subject, demonstrating the charming things that can happen when a life in no way ordinary gets documented by a filmmaker most unusual.

"Escapes" is an eccentric portrait of a not especially eccentric - or even terribly interesting - subject ...

[An] enjoyable doc, which touches on everything from flamenco to Blade Runner and leaves us wanting more.

Fancher is just one of those guys -- you know the kind. The word is usually "raconteur," but that doesn't quite seem to cover it, here. In fact, there isn't a word in the English language that does.

To make it in Hollywood, you got to have duende, and Hampton Fancher has duende in spades.

Michael Almereyda's brilliant documentary Escapes presents a massive backlog of images from the career of actor and screenwriter Hampton Fancher, tinging it with Fancher's own keen self-awareness.

Escapes feels like a fitting and strange tribute to someone whose robust intimacy with life remains just as complicated today.

Watching the film is often frustrating, but only because it surrounds its interesting subject with half-baked narrative devices, none of which accentuate his story, so much as they drown it out.

Hampton Fancher, best known for his Blade Runner screenplay, here is seen in a documentary about the fascinating journey of his life, from obscurity to fame, peppered with numerous film clips from his days as a TV and movie actor.

Taken as a whole, this winningly off-kilter film tells the tale of an undeniable Character, who not only lives but occasionally thrives in an uniquely toxic environment.

There are no featured audience reviews yet. Click the link below to see what others say about Escapes!