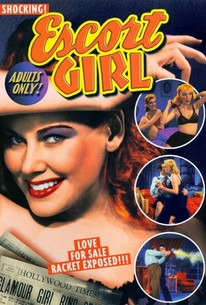 The outwardly respectable middle-aged couple behind Hollywood's most successful escort service finds their lucrative empire unexpectedly threatened when their daughter returns home from a surprise visit in the arms of an undercover investigator from the District Attorney. For the right price, Ruth Ashley and Greg Stone will find any man a suitable companion. Their clandestine prostitution business presided over by stealthy ex-con Breezy Nolan, Ruth and Greg use their wealth to send unsuspecting daughter June away to an expensive boarding school in hopes of protecting her from the ugly truth. When June drops in for a surprise visit with handsome beau Drake Hamilton, however, the seams in the ruse finally begin to show. Unbeknownst to June, Drake is an undercover investigator from the District Attorney's office who's been sent to gather enough evidence to have the business shut down, and her parents prosecuted.

Just a dreadful exploitation B film.

There are no featured audience reviews yet. Click the link below to see what others say about Escort Girl!