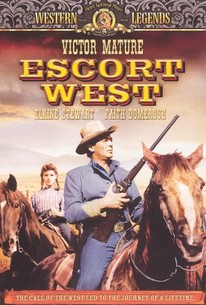 This trite, low-budget Western stars Victor Mature as Ben Lassiter, a former Confederate soldier who is traveling to the Western U.S. with his daughter, Abbey (Reba Waters), just after the Civil War. Their journey is interrupted by a group of Union soldiers on patrol and the recent war casts its shadow over this encounter. Beth Drury (Elaine Stewart) is riding along with the group of Union soldiers and soon she and Lassiter become romantically entangled. Throw in her rabid anti-Confederate sister and a few hostile Native Americans, and the story is complete with the usual characters and antagonisms.

Charles Soldani
as Indian
View All

A tolerable low-budget B Western.

It's a B western but as these things go a rather good one.