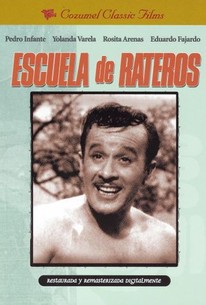 A delivery man sets himself up for a case of mistaken identity in this musical comedy. Victor (Pedro Infante) is an actor whose former friendship with a notorious thief comes back to haunt him when the robber threatens to reveal ugly secrets about Victor's past. Victor decides to contact the police about the extortion attempt, but someone kills Victor while he's speaking with the authorities. The police persuade Raul (also played by Infante), the driver of a bread truck who bears a striking resemblance to Victor, to pose as the murdered thespian as they try to track down the killers. Raul soon finds himself dealing with Victor's unsavory acquaintances, as well as a beautiful woman who had fallen victim to one of his schemes. Escuela de Rateros proved to be the last film featuring the popular Mexican actor and singer Pedro Infante; he died in the crash of an airplane within a year of its release.

Director Rogelio Gonzalez extracts all possible suspense and humor out of the brisk script and still manages to leave room for Infante to sneak in a cancion or two.

There are no featured reviews for Escuela de Rateros at this time.