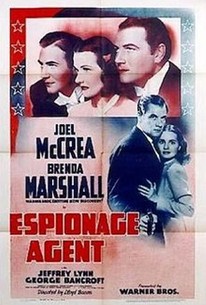 Unlike many another pre-WW II spy melodramas, Espionage Agent clearly identifies the villains as Germans. Joel McCrea plays Barry Corvall, the son of a recently deceased US diplomat. Boarding a Berlin-bound train, Corvall attempts to swipe a briefcase stuffed with documents which will prove that the Nazis have been infiltrating vital industrial centers in the United States. He is helped along by Brenda Ballard (Brenda Marshall), whose behavior suggests at times that she might not be all that trustworthy. According to the Warner Bros. publicity machine, Warren Duff's screenplay was based on actual events. Coming on the heels of the studio's Confessions of a Nazi Spy, Espionage Agent was indication enough that Warners had declared war on Germany long before President Roosevelt made it official.

Edwin Stanley
as Secretary of State

Fredrik Vogeding
as Man
View All

Espionage Agent is filled with as many improbabilities as spies, and it is almost as hard to avoid spotting them.

The whole job seems to have been done very easily.

There are no featured reviews for Espionage Agent at this time.