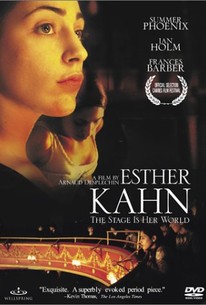 The English-language debut of French director Arnaud Desplechin, Esther Kahn charts the ascension of a lower-class Jewish girl from a turn-of-the-century London ghetto to one of the stage's leading actresses. Esther (Summer Phoenix) feels set apart from her large, raucous family, who are all employed in the garment business. Her life is changed when she attends a Yiddish theatre performance, and she is suddenly determined to become an actress. After joining a small theatre company, she becomes the protégé of Nathan (Ian Holm), a stage veteran who instructs her in her chosen craft. Esther gradually works her way up in the ranks -- taking a lover, brainy French theatre critic Philippe (Fabrice Desplechin), along the way -- until she is cast in the title role of Hedda Gabler, which she performs to great acclaim. ~ Rebecca Flint Marx, Rovi

The narrator and the other characters try to convince us that acting transfigures Esther, but she's never seen speaking on stage; one feels cheated, and Esther seems to remain an unchanged dullard.

What makes Esther Kahn so demanding is that it progresses in such a low-key manner that it risks monotony. But it's worth the concentration.

Ms. Phoenix is completely lacking in charm and charisma, and is unable to project either Esther's initial anomie or her eventual awakening.

It's a lot to ask people to sit still for two hours and change watching such a character, especially when rendered in as flat and impassive a manner as Phoenix's.

The French director has turned out nearly 21/2 hours of unfocused, excruciatingly tedious cinema that, half an hour in, starts making water torture seem appealing.

Among the best films ever made about acting...

I found it endlessly fascinating.

It's a strange film, one that was hard for me to warm up to.

Attempting to determine whether the offstage trauma that she's undergoing is genuine or an extreme form of method acting becomes the film's dramatic crux, and it's more than enough to hold the viewer's attention

The biggest problem I have (other than the very sluggish pace) is we never really see her Esther blossom as an actress, even though her talent is supposed to be growing.

An ambitious, serious film that manages to do virtually everything wrong; sitting through it is something akin to an act of cinematic penance.

There are no featured audience reviews yet. Click the link below to see what others say about Esther Kahn!