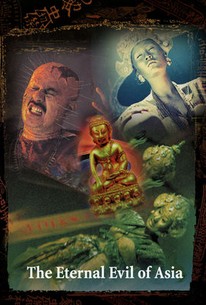 Hong Kong filmmaker Man Kei Chin's outrageous style is already well-known to viewers of his cult fantasy Sex and Zen II, and in this softcore Category III horror-comedy, he takes some particularly kinky liberties with the magical horror subgenre. A group of friends takes a trip to Thailand some time in the 21st century and runs into a mighty sorcerer, whose sister they accidentally kill. When they get back to Hong Kong, the sorcerer's curse follows them and they begin to die in peculiar and flamboyant ways. One is victim of the Hungry Ghost Hex, and begins cannibalizing diners at a restaurant before eating his own arm, another butchers his family with a meat cleaver before jumping off a building and being impaled on a neon sign, and poor Kong (Tsui Kam-Kong) has his head turned into first a penis and then a pincushion. Julie Lee has an entertaining aerial sex scene, veteran Lo Mang appears in a cameo as a Taoist priest, and Yuen King-tan plays yet another hysterical hair stylist. Eventually, besieged heroine May (Ellen Chan) turns to her best friend Mei (Lily Chung), a Thai sorceress, to save her and Kong from the curse. Chan Kwok-pong co-stars with Ben Ng in this romp that is strictly for adults only. ~ Robert Firsching, Rovi

Ellen Chan
as May

There are no critic reviews yet for Nan yang shi da xie shu (The Eternal Evil of Asia). Keep checking Rotten Tomatoes for updates!