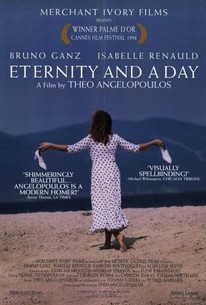 Eternity and a Day Photos

Theo Angelopoulos (Reconstruction) directed this 1998 Cannes Film Festival Palme d'Or winner about a famed author nearing the end of his life. Alexander (Bruno Ganz) lives in his old seaside family home near Thessaloniki, but his daughter and son-in-law plan to sell the house, slightly damaged by an earthquake. Seriously ill, Alexander thinks if he checks himself into the hospital, he'll never check out. Awash in nostalgia, he recalls his late wife, Anna (Isabelle Renauld), seen in flashback, and he lets his daughter read a letter her mother had written to him right after her birth. Alexander's current project involves completing the last unfinished work of a 19th-century poet, but he puts that aside in order to spend time finding a home for his dog. Since his son-in-law won't take the dog, Alexander gives it to his servant. After rescuing an Albanian boy (Achileas Skevis) from a gang that sells children to wealthy Greeks who can't adopt legally, Alexander intends to return the youth to his grandmother in Albania. However, the child lied, and Alexander is unaware the boy has no grandmother. The old man and the boy set forth on a journey, and the other bus passengers include several musicians and the 19th-century poet (Fabrizio Bentivoglio). Bruno Ganz was dubbed into Greek for this Greek-French-Italian co-production.

Fabrizio Bentivoglio
as The Poet

Achileas Skevis
as The Child

Isabelle Renauld
as Anna
View All

Critic Reviews for Eternity and a Day

This is not light stuff. But if Alexandre doesn't find the answer to [his] question, he does finally come to a reconciliation that ultimately makes Eternity and a Day a lesson more about living than dying.

I was moved and captivated throughout its 132 minutes.

Its long, fluid takes escort us through space and time, to universal themes and broader topicalities, effortlessly fending off charges of hermetic aestheticism.

The quiet, hypnotic intensity of the cinematic journey one experiences in Eternity and a Day is a rare and lasting pleasure.

Angelopoulos' meditation on the meaning of one man's life is genuinely hypnotic in its way of transcending ordinary narrative.

Makes a somber redemption song out of melancholy and infinite sadness, one whose eloquence transcends its stark Andrei Tarkovskyian dankness and somnambulism.

Thought poets were a dying species, did you?

Why put up with so much that seems insufferable? Because at the end of Eternity and a Day, Angelopoulos somehow translates a character from the world of dreams to the world of reality instantaneously, before your eyes.

It has a great deal of somber beauty to recommend it.

Invites and encourages us to reap the blessings of true connection with others.

Overall, Angelopoulos' film gives the viewer a sense of the infinite ... even if its languid artiness occasionally lulls you to sleep.

Audience Reviews for Eternity and a Day

There are no featured audience reviews yet. Click the link below to see what others say about Eternity and a Day!

Eternity and a Day Quotes