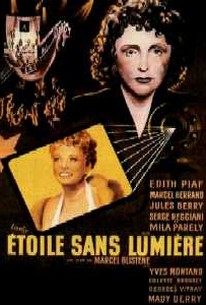 Etoile Sans Lumiere (Star Without Light) represents a rare screen appearance by French singing sensation Edith Piaf. The plot is something of a predecessor to Hollywood's Singin' in the Rain (1952), albeit with a less happy denouement. Piaf plays an aspiring singer who tries to break into films during the early talkie era. She is hired to dub the singing and speaking voice of a silent-movie favorite (Mila Parely). Sworn to secrecy, the fill-in must stand by in silence as the star receives all the praises and plaudits. When the truth is revealed, the result is disastrous for everyone concerned. Etoile Sans Lumiere is chiefly memorable as the screen debut of Edith Piaf's protégé Yves Montand. ~ Hal Erickson, Rovi

There are no critic reviews yet for Étoile sans lumière, (Star Without Light ). Keep checking Rotten Tomatoes for updates!

Decent enough drama of poor girl given the chance by underhanded movie people to use her singing talents at the expense of anonymity. The real reason to watch is to see a rare starring role for Edith Piaf and she sings plenty of times. Gotta hand it to the French, even in the '40s they were dead set against a completely happy ending.