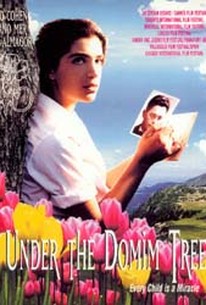 The trials and tribulations of four teenagers--some of whom were orphaned by the Holocaust--living on an Israeli kibbutz in 1953 provide the basis of this Israeli episodic drama. Each one deals with very different problems. Aviya attempts to find information about her deceased father; Yurek tries to prevent authorities from sending his best friend to a boarding school while Yola copes with the news that her father has just died in Poland. Finally, Mira must fight the two people who claim to be her estranged parents and who have taken her to court to win custody. Mira knows in her heart that these two are no relation. ~ Sandra Brennan, Rovi

Critic Reviews for Etz Hadomim Tafus (Under the Domim Tree)

This film,a follow-up to Gila Almagor's memori film Summer of Aviya, portrays in an emotionally touching way the Holocaust anguish, see through the eyes of the tragedy's most helpless and innocent victims, children.

Audience Reviews for Etz Hadomim Tafus (Under the Domim Tree)

A slightly less valuable film than Summer of Aviya, Under the Domim Tree is an unfortunately pedestrian treatment of life on a kibbutz that is unfortunately not terribly compelling.