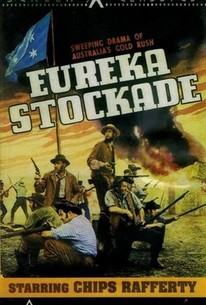 Released in the U.S. as Massacre Hill, the Australian Eureka Stockade was one of that country's biggest and most expensive postwar productions (it was nearly two years in the making!) Set during the 19th-century Australian gold rush, the film top-bills Chips Rafferty as boisterous prospector Peter Lallor. The gold bonanza is threatened by the arrival of claim-jumpers, usurpers and government bean-counters. At first, the prospectors intend to use random mob violence to ward off the invaders, but Lallor organizes the group into a strong, united front, as willing to mediate as to bust heads. Future star Peter Finch is eighth-billed as "Humffray." Eureka Stockade was remade years later as a TV miniseries.

There are no critic reviews yet for Eureka Stockade. Keep checking Rotten Tomatoes for updates!

There are no featured reviews for Eureka Stockade at this time.