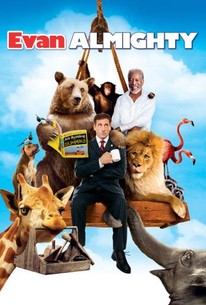 40-Year-Old Virgin star Steve Carell reprises his role as preening newscaster Evan Baxter in this heavenly sequel to the 2003 Jim Carrey comedy hit. Shortly after television anchorman-turned-U.S. congressman Evan Baxter (Carell) relocates his family from Buffalo to Northern Virginia, God (Morgan Freeman) reveals to him that a devastating flood is coming and the planet is about to be cleansed once again. Later, when Baxter accepts the responsibility of building a great ark and his rapidly changing physical appearance begins to draw media attention, his skeptical family attempts to discern if his actions are driven by delusion or divine intervention. John Goodman, Wanda Sykes, Jonah Hill, and Molly Shannon co-star in a divine comedy of truly epic proportions. ~ Jason Buchanan, Rovi

Larry Dorf
as Officer B. McKenzie

Jon Stewart
as Himself
View All

For long after the waters have subsided, there remains a very wide gap between havoc and hilarity.

Should have been a lot more amusing than it turns out.

Safety over satire at almost every turn.

It all goes down about as smoothly as an apple in the Garden of Eden.

Loathed during its initial theatrical run, I fail to see the ultimate sin of Evan Almighty, outside of some painfully lazy screenwriting and irritating pace issues.

Fans of the original film will find much to enjoy, though they really shouldn't and it would be morally indefensible to encourage them.

There's a great deal of comedic talent working here, and none of them can muster anything more than a decent chuckle.

The Bruce Almighty spinoff gets a touch preachy and saccharine at times, but it's still fun and funny enough to work as a nice, family-friendly diversion.

Evan Almighy is a big success. It's not the worst movie ever and it made over one hundred million dollars at the box office. Bruce Almighty is better, but Evan Almighty deserves credit. This time around, congressman Evan Baxter has to build an ark before God punishes the world with a flood. Steve Carell did a good job, even though once or twice he got on my nerves. He was pretty funny. I think the funniest parts of the film is when Wanda Sykes is in it. She is made me laugh the most. It kind of amazes me that this comedy can turn into a CGI thriller in a blink of an eye. The effects were awesome, as with most big-budget movies. I recommend this film to everyone. 5 Stars 12-12-07 (Updated)

Evan (Steve Carell) meets God (Morgan Freeman) who commands him to build an ark to save people from the flood. His family and colleagues think he is going through a mid-life crisis. This movie is better than Bruce Almighty.

Evan Almighty is the most expensive comedy film of all time. It's effects are superb but it's not worth the money that it cost to make it. The whole sequel was unnecessary in the first place and the jokes were over used and tired. Steve Carell tries to make the film better with an enthusiastic performance but even he cant save this film from the flop flood.

Evan Almighty is an awful sequel to an awful film. I hated this film, I hated the message it, and everything about it was horrible. The story was bad, the acting was bad the pacing was bad, and as a religious comedy it failed just like the first one. I felt that the entire religious theme didn't work whatsoever, and I felt it was very preachy in the way it was delivered on-screen. The jokes were poorly written, and Steve Carrell, who usually is funny, is wasted here. So is Morgan Freeman. The film is a poor sequel to a film that should never have had a sequel in the first place. Bruce Almighty was horrible; I don't even know why they followed it up with a boring, uninspired preachy sequel. The cast do what they can with such a poorly written script; unfortunately the film can't be saved. This is yet another stupid sequel to a stupid, idiotic first film I really didn't see the point of this film, the film is painful to watch and is so poorly made that you lose interest. You realize that this films premise is paper thin, and the gags are stale, and don'[t hold up well at all. This is a biblical disaster for believers and non believers alike. I was very bored watching, and by the time the credits finally rolled, I was thrilled it was over. A few months after this films release, I resorted to Atheism. A poorly made film and a pointless, unimpressive comedy that has no direction.