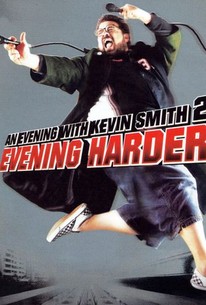 Writer/director Kevin Smith is well known for his sincere devotion to his loyal fan base, and in this release, the man behind Clerks, Mallrats, and Dogma sets his sights on college campuses in London and Toronto in order to answer questions and offer a series of amusing anecdotes. Joining Smith on-stage is frequent collaborator Jason Mewes, who samples Canadian cuisine with the director and tries out a number of humorous pick-up lines on unsuspecting urbanites.

Critic Reviews for An Evening with Kevin Smith 2: Evening Harder

There are no critic reviews yet for An Evening with Kevin Smith 2: Evening Harder. Keep checking Rotten Tomatoes for updates!

Audience Reviews for An Evening with Kevin Smith 2: Evening Harder

Despite the London segment being a little slow, this Q and A session is just as funny and entertaining as the first evening.

At this point I think Kevin Smith is better at these Q and A's and podcasts than making actual movies.