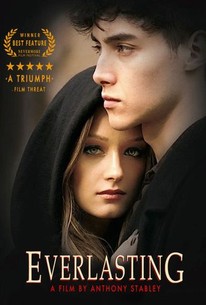 A High School Filmmaker documents his solo journey from Colorado to L.A. in search of the serial killer responsible for the murder of his girlfriend. The film intermixes home footage, real time clips and the eventual climax with the murderer.

Everlasting stylistically combines the essence of an investigative documentary normally associated with true crime shows like Beware the Slenderman with personal home video, flashback and real-time footage to convey a haunting and engaging story.

Everlasting is anything but passive; it's perpetually moving and evincing its empathy and heartache in subtle strives.

Everlasting is a deeply conventional film despite its alternative trappings and it never really succeeds in finding a distinctive voice.

One of the joys of Movies In Focus is that the site is able to shine a light on many films which might otherwise get overlooked.

The portrayal of its young lovers torn apart by murder so cruel has a certain power that intrigues and engrosses.

Honest portrayals of teenagers can be a bit hard to come by, but Everlasting is a triumph on all levels.

Everlasting is clearly a work of love, and Anthony Stabley's film kept me wrapped up in its narrative until the final moment.

no faulting Stabley's ambitions here, as he presents a time-leaping, mixed-media kaleidoscopic vision of a young Lynchian 'woman in trouble', caught between free agency and victimhood - under the Hollywood sign.

Everlasting is a remarkable film that's perhaps a little too understated and low budget to be on the mainstream's radar, but for those able to check it out will be greatly rewarded.

Like an big blockbusters, independent cinema has hits and misses. Blockbusters either make billions or are forgotten about, while indies either make their way around festivals and gain traction, or simply are left in the dust. Everlasting, a small picture that has been winning some pretty big awards under the radar is a film that's now available to rent or own on many streaming services. If you are looking to view a film that you probably haven't heard about and be pleasantly surprised, then I believe Everlasting is the perfect film for you. Using some very hefty techniques in storytelling, this film takes a few risks that I wasn't expecting, thus sparking a liking which will surely be one of my favourite indies in a while. Here are my thoughts on Everlasting. After travelling on her own to Los Angeles and being murdered, a young filmmaker decides to document his journey with the hopes of finding his girlfriend's killer. Sort of told in a non-linear fashion through flashbacks of happier times and "real" footage caught on tape of this murderer's victims, there is a very horrific feeling that you may get when watching this film. Everlasting has a very unique way of telling its story and with performances that feel very raw and authentic to reality, this is a film that should have made it out to the public in the way that Paranormal Activity did. Although fictional, there is a very large and overbearing sense of realism present throughout this film, which is easily its biggest selling point. Although the depressing aspect is thrown out the window when you know she has been murdered early on in the film, it becomes more about the interesting investigation and enjoying the fond memories that they shared together in the recent past. Everlasting is all about the build up to whether or not Matt will end up finding the justice he has been seeking. Through many flashbacks and past encounters, certain elements are brought to fruition and become twists within themselves. This film is very well-structured, never giving away its reveals, but always quietly hinting at them along the way. If you are a fan of the mystery genre, that is the genre I would most associate this picture with. What I was personally able to take away from this story was the fact that so many people die every day and all we have to go on is an image of them. If we don't know them, we make quick judgements on what they may have been like and nothing more. This film takes the time to explore the past of it's fallen subject in order to make viewers truthfully care about its subject. So many blockbusters have disposable characters and hardly ever take the time to full flesh them out, but when you make your entire film based around that, there really isn't much to dislike about it. From beginning to end I found myself enthralled in this premise and there was hardly ever a dull moment in its mere 82 minute run time. In the end, Everlasting is a great viewing experience for those who love great mysteries, a solid thriller, or a film filled with dedicated performances. This is an independent piece of cinema that really cares about its characters and depicting them in a very niche way. I was engaged from start to finish, with highlights being performances by the every devoted Valentina de Angelis and dedicated Adam David. Although this film won't appeal to everyone, due to the fact that this style is out of the ordinary, true cinema lovers will get a nice dose of terrific storytelling. Everlasting is a film that I have to recommend with the risk of it being off-putting to some, but for what this film sets out to accomplish, it's near perfect. Looking for a great film? I don't believe you will regret checking this one out.