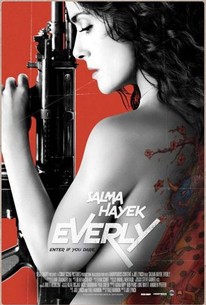 An action/thriller centered on a woman who faces down assassins sent by her ex, a mob boss, while holed up in her apartment.

Togo Igawa
as The Sadist

Masashi Fujimoto
as The Masochist

Critics Consensus: Focus is Sleek and Slick But Too Twisty

Those with an adolescent nostalgia for video-nasty era degradation/retribution may be mildly titillated, but Lynch has neither the wit nor desire to raise this above the level of faux-retro fanboy fantasy.

Lynch shows some visual flair with a few clever, Tarantino-like touches but the film overall is a deadening and claustrophobic experience, in which the human interest diminishes as rapidly as the body count rises.

Salma Hayek stars in what must be the most distasteful and exploitative film of the year so far.

A gruelling gimmick thriller, pitched at dead-eyed graduates of the Matthew Vaughn school of cinematic sociopathy.

If it were an exam paper, you'd scrunch the whole thing up into a ball and throw it back at the overconfident poser who'd just submitted it. Preferably on fire.

With its drab visual palette and ceaseless repetition of violence, there's little to recommend.

Everly is a loud joyous, proud celebration of its genre, and frankly, it's just a hell of a fun thing to watch.

At times threatening to be the glorious piece of exploitation cinema it occasionally aims for, Everly never really gets a grip on... anything, really.

From the first time we meet our tragic hero, Everly is a roller-coaster of escapism every action fan should take in.

All said and done, this is Salma Hayek channeling her inner GI Jane. It could have been way more ambitions though.

"That's a lot of dead whores." Salma Hayek stars as Everly in this gritty and ultraviolent action film. A quaint little Christmas story, Everly, a prostitute who's been enslaved for four years, tries to escape from the apartment complex that she's been held captive in and reunite with her estranged mother and child, but first she'll have to fight her way through dozens of henchman and assassins. The action scenes and fight choreography are well-done, and bring a lot of energy to the film. Yet the tone stays rather light by using black comedy to alleviate the violence. However, limiting the scope to a single apartment and a hallway gives a rather cheap, B-movies feel to the film. And aside from Hayek, the performances aren't that good. Everly has its moments, but mostly it's just mindless action and gratuitous violence.

I was not sure if this was supposed to be humourous in its violence or intent but I struggled to actually finish watching this without feeling my time was wasted. Disjointed and terrible at times. Not even Salma Hayek, who doesn't even seem to want to try to act and be believable can save this.