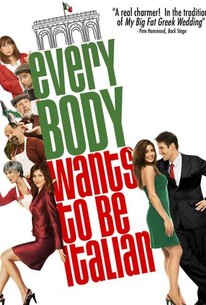 Everybody Wants to Be Italian Photos

A lovelorn urbanite who has spent nearly a decade trying to win back his ex-girlfriend gets involved in a romantic case of mistaken ethnicity in director Jason Todd Ipson's warmhearted relationship comedy. It's been eight years since Jake's girlfriend left him, and despite the fact that she's now married with three children, he refuses to move on. Fed up with their depressive pal's unwillingness to let go of the past, Jake's friends set him up on a blind date with a beautiful Italian woman from Boston's North End. Though Jake is convinced that such a woman would never even consider dating a non-Italian, a quick crash course in how to fake it may prove just the trick to helping him learn to love once again.

Anthony Russell
as Nick the Jeweler

Zak Lee
as The Waiter

Jennifer Welch
as Neighbor
View All

News & Interviews for Everybody Wants to Be Italian

View All Everybody Wants to Be Italian News

Critic Reviews for Everybody Wants to Be Italian

A clarification is in order. Nobody wants to be these Italians.

This particular film surely straddles the line between 'romp' and 'zany,' and maybe even deserves that most hallowed of accolades: 'zany romp.'

This lame-brain romantic comedy strives hard for a shambling charm, but is unlikely to prove appealing to even the most undemanding of audiences.

[Sets] up hackneyed relationships, conflicts and resolutions with such a lack of imagination and subtlety that paying attention to narrative particulars quickly becomes a waste of time.

A box of cannoli long past its sell-by date.

Full of clunky humor, battle-of-the-sexes musings and spicy accordion music, Everybody Wants to Be Italian is relentless -- but not necessarily relentless fun.

While not being entirely original or clever in its exploration of modern Italian culture, it's a light-hearted film which delivers just enough giggles to keep it upbeat and kind of cute.

Instead of making a likeable main character, the filmmakers give us the egotistical, brash, rude and obnoxious character of Jake.

If you thought the ethnic stereotyping in My Big Fat Greek Wedding was bad, this charmless romantic comedy will drive you to despair.

The film is a reminder why romantic comedies have died off so much in recent years.

Audience Reviews for Everybody Wants to Be Italian

There are no featured audience reviews yet. Click the link below to see what others say about Everybody Wants to Be Italian!

Everybody Wants to Be Italian Quotes