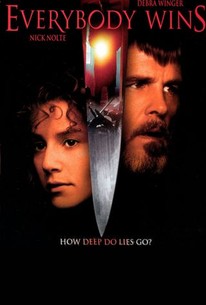 Private investigator Tom O'Toole (Nick Nolte) is reluctant to take on a case offered to him by cryptically offbeat Angela Crispini (Debra Winger), but he lets himself be seduced by her. Angela believes that Felix Daniels (Frank Military) was wrongly convicted of murdering his uncle. As O'Toole learns more about the crime, he becomes convinced that Felix was framed by corrupt local officials, including States Attorney, and old rival, Charlie Haggerty (Frank Converse). O'Toole also falls in love with Angela, who increasingly appears to be a psychologically disturbed woman who may have been involved with several of the principals. When Angela admits that she doesn't always know when she is telling the truth, she speaks to O'Toole's predicament and the film's theme: the dangers of relying on an unreliable narrator.

Will Patton
as Jerry

R.M. Haley
as Driver
View All

Critic Reviews for Everybody Wins

As any gambler knows, the trouble with everybody winning is that you end up with a pretty unsatisfactory pay-out.

Audience Reviews for Everybody Wins

This movie was crazy. Especially Will Patton's character.

Nolte plays an investigator who gets hired to prove that a teenage girl didn't commit a murder. He soon discovers that many people in the town have covered up the case. This was an ok movie, nothing special but Nick Nolte who's a great actor.