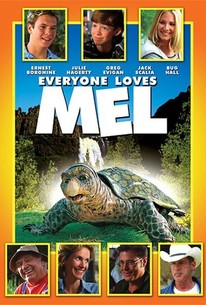 Joey Travolta directed this comedy-drama for the family. Two children from the city spend the summer at their grandfather's ranch where they make a new friend -- Mel, grandpa's giant turtle who can do tricks and loves pancakes. But while Grandfather and the kids are all very attached to Mel, one of his neighbors is opening a theme park and wants Mel as their official mascot ; he's willing even to steal him if Grandfather won't turn him over willingly. Julia Hagerty, Ernest Borgnine, Jack Scalia, and Greg Evigan star.

Critic Reviews for Everyone Loves Mel

There are no critic reviews yet for Everyone Loves Mel. Keep checking Rotten Tomatoes for updates!

Audience Reviews for Everyone Loves Mel

This movie is overall very cute and very unique. The special effects are not anything special, but that just adds to comedy. The acting is actually very good, especially Bug Hall, who is a really good actor. It is great movie to watch with your family, and it is very entertaining. film even has jokes thrown in for the parents, and teaches a very good lesson, which is portrayed beautifully. This is a truly unique movie that keeps you at the edge of your seat all the way.