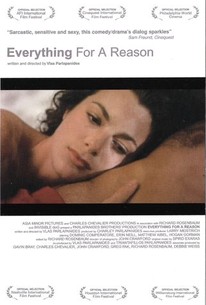 A group of young Greek-Americans try to sort out their problems with life and love in this independent romantic comedy. Manny Papadopoulos (Dominic Comperatore) is an aspiring author in his mid-twenties who is trying to get his career going while still living with his parents. Manny meets Eve Stephanopoulos (Erin Neill), an attractive woman his own age, and they begin dating. Manny soon learns that Eve is a virgin and in no hurry to change; Manny agrees to respect her boundaries, though he doesn't mention that it has a lot to do with his own emotional issues regarding sex. Manny's friends Mike (Mike Woodbridge) and Teddy (Matthew Aibel) think he's a fool for pursuing a relationship where he isn't getting any action, but both have girl trouble of their own: Mike can't stay faithful to one woman and is cheating on his significant other with Eve's sister Joanne (Tiffany J. Shepis), while Teddy tells his on-again, off-again girlfriend Jenny (Hogan Gorman) that he's won a trip for two to the West Indies in a misguided attempt to win her back. Everything For a Reason was written and directed by Vlas Parlapanides and produced by his brother Charley Parlapanides; the film was the first feature for both of them. ~ Mark Deming, Rovi

Critic Reviews for Everything for a Reason

A perfect mix of romantic warmth and worldly-wise cynicism, it's the work of a budding director who can deliver on both commercial and artistic levels. Shown with Sean McBride's That Special Monkey.

This romantic comedy type movie is familiar yes, however it also brings a uniqueness that makes the story its own.

This is an imperfect but promising feature debut for filmmaker and cast.

An absolute charmer [with] heart, humor, the Jersey Shore, and plenty of local Jersey/Philly touchstones.

While their characters, for the most part, are cliché the portrayals were not. Yet, as I walked away from Everything For A Reason I couldn't help but feel confused and as if I were left to tie up all the loose ends myself.

There are no featured reviews for Everything for a Reason at this time.

Everything for a Reason Quotes