Everything Happens at Night (1939) 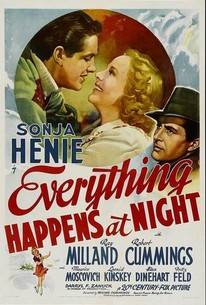 20th Century Fox's Christmas gift to moviegoers in 1939, this fanciful comedy-drama features the studio's darling of the ice, Sonja Henie. She plays the daughter of a Nobel Peace Prize-winner feared murdered by the German Gestapo. A couple of rival American newspaper reporters, Ray Milland and Robert Cummings, discover that the legendary Professor Norden (Maurice Moscovich) is still very much alive and living under an assumed name in Switzerland. The heroes, however, completely forget their critical assignment after spotting the professor's lovely daughter, Louise (Henie), and their preoccupation with the girl nearly leads to disaster. Fox borrowed Ray Milland from Paramount for this Henie vehicle, which was partially filmed at Sun Valley, ID.

Michael Visaroff
as Otto, the Woodcutter

Frank Reicher
as Becher, the Pharmacist

Rolfe Sedan
as Felicien, the Waiter

Georges Renavent
as Gendarme on Dock

Critic Reviews for Everything Happens at Night

The moment the plot turns from comedy to drama, it becomes so muddled and far-fetched, that the spectator is bored.

Everyone is happy and the audience is a little bored... We wish better luck for the graceful skater in the future. [Full review in Spanish]

There are no featured reviews for Everything Happens at Night at this time.

Everything Happens at Night Quotes