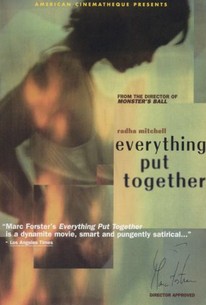 Marc Forster directs this chilling psychological drama about a young mother trying to come to terms with the loss of her first born. Angie (Radha Mitchell) and her husband Russ (Justin Louis) live a quiet suburban life. At the film's opening, Angie, along with her best friends Judith (Catherine Lloyd Burns) and Barbie (Megan Mullally), who also happen to be pregnant, gleefully discuss morning sickness and baby showers. After her textbook delivery to a healthy boy, the doctor pulls Russ aside and whispers something in his ear. Angie's worst fears are confirmed when she learns that her child suddenly died, a victim of sudden infant death syndrome. In spite of loving support from her husband and friends, Angie quickly spirals into a deep depression and begins developing morbid obsessions, such as going to morgue to examine her baby, visiting the place where her child's toys are buried, and watching children at play in the park. Shot on digital video, the film features an intense emotionally immediacy. This film was screened at the 2000 Sundance Film Festival.

Pamela Gordon
as Nurse A

Octavia Spencer
as Nurse B

Thomas Prisco
as Doctor A

Rob Swanson
as man in park

Critic Reviews for Everything Put Together

A riveting haunting chronicle of a young mother who's lost her baby (a splendid Radha Mitchell), the film lacks sharp narrative but has emotional immediacy and intensity and displays the voice of a gifted director, Marc Forster, a major talent to watch

Everything Put Together takes a couple of curious turns that you will either applaud or hiss at, depending on the type of film you are looking for.

Aims for genuine discomfort, and it hits the mark with intelligence and style.

The subject matter is queasy, but Radha Mitchell ... is pitch perfect as Angie.

Despite an evocatively dark-toned DV atmosphere, is too responsible to erupt into the kind of operatic maternal horror it keeps threatening the audience with.

[Foster] shoots this rather grim film like a pretentious horror flick.

Suspenseful and satirical, it approaches a modern day suburban nightmare.

While pockmarked by some flaws and blemishes, it remains an intriguing effort, marking the debut of a young director worth keeping an eye on.

It may be a decent reflection of the shallowness of our society, and the unwillingness of many to get involved when they're most needed, but it didn't evoke any emotional reaction from me...just the feeling that I'd been robbed of my time.

With Mitchell's stunning performances at the center...a small picture that packs a major wallop.

Everything Put Together spirals off into some weird Twilight Zone where nothing makes any emotional sense.

Audience Reviews for Everything Put Together

There are no featured audience reviews yet. Click the link below to see what others say about Everything Put Together!

Everything Put Together Quotes