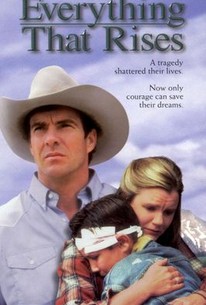 Dennis Quaid made his directorial debut with this TV movie, a contemporary western filmed in Livingston, Montana with Quaid also down as executive producer. Tough, unemotional ranchowner Jim Clay (Quaid) and his faithful wife Kyle (Mare Winningham) have a teenage son Nathan (Ryan Merriman) who hopes to enter the rodeo big leagues, just like his dad. Instead, an auto accident leaves Nathan a paraplegic. Jim is devastated, since he was the cause of the accident. The situation brings father and son closer as the family attempts to deal with the tragedy. Premiered July 12, 1998 on TNT.

Critic Reviews for Everything That Rises

There are no critic reviews yet for Everything That Rises. Keep checking Rotten Tomatoes for updates!

There are no featured reviews for Everything That Rises at this time.

Everything That Rises Quotes