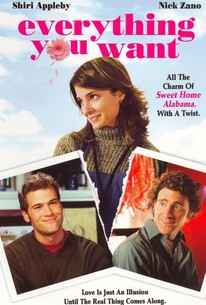 Everything You Want Photos

Having lived a sheltered childhood while her absentee parents traveled all over the world, artist Abby Morrison (Shiri Appleby) has developed an extraordinarily vivid imagination, but her grasp on reality is tenuous at best. Now the roommate of Jessica Lindstrom (Alexandra Holden), Abby agrees to tutor Jessica's cousin Quinn (Nick Zano), a selfish and cynical college student. Much to her surprise, Abby is attracted to Quinn, helping him to come out of his shell and develop his own artistic talents. But when it comes to romance, Jessica remains true to her "dream man" Sy (Orlando Seale), who poses for her paintings and shares all of her likes and dislikes -- and whom nobody but Abby has ever seen. Based on a play by Natalie Prado, the made-for-cable Everything You Want premiered April 17, 2005, on the ABC Family Channel.

Will Friedle
as Calvin Dillwaller

Larry Bagby
as Darwin
View All

Critic Reviews for Everything You Want

romantic comedy with a bare minimum of either

Audience Reviews for Everything You Want

It was cute and funny and very quirky. A creative work of art.

A great movie! A favorite.

Everything You Want Quotes