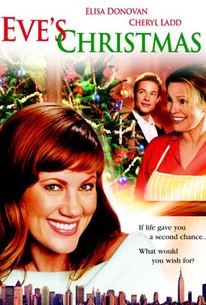 Thirty-three-year-old ad executive Eve Simon (Elisa Donovan) is, to all outward appearances, a success, and a fabulously wealthy one in the bargain. Even so, as she sits alone nursing an expensive drink in an upscale Manhattan watering hole on Christmas Eve, our heroine wonders if it's all been worth it -- and, more to the point, how would her life have turned out had she made different choices. "Wish upon the Christmas star!" advises a philosophical derelict named Brother James (Peter Williams). Eve does just that -- and she awakens, it is 12 years earlier, she's an unemployed 21-year-old living with her parents (Cheryl Ladd, James Kirk), and she's still engaged to Scott (Sebastian Spence), the hometown boy whom she would ultimately dump in her pursuit of a career in the Big Apple. So, will she make the same choices again, or will she follow her heart instead of her head the second time around? Made for the Lifetime cable channel, Eve's Christmas premiered December 6, 2004.

Buddy the Dog
as Stoney
View All

There are no critic reviews yet for Eve's Christmas. Keep checking Rotten Tomatoes for updates!

Really nice little Christmas story. I was quite impressed with this one as it doesn't drag as Christmas movies have a tendency to, and though obviously it was sentimental, it also had quite a good story to it. Elisa Donovan does a good job here, though I did have to agree with a previous reviewer who commented on her hair - it really does look shocking in some scenes - not enough to put me off her character, LOL, but enough to make you wonder if they splashed out on a hairdresser for this, or got her to do her own hair! If you are looking for just a nice little Christmas film to watch with the family, you could certainly do worse than this one.