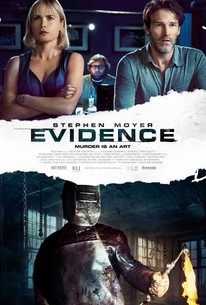 A team of detectives (Stephen Moyer and Radha Mitchell) attempt to piece together what happened at the scene of a brutal massacre using a number of recording devices found at the crime scene. The footage reveals a group of bus passengers who were forced to fight for their lives after they crash in the middle of the desert and a mysterious killer violently murders them one by one. (c) RLJ/Image Entertainment

Moyer plays scenes as if he'd rolled out of bed at noon after a long night of shooting in Bon Temps and had his script pages shoved into his hands five minutes before the director called "Action."

[A] combination of chaotic phony found footage and whimpering models.

You don't really care who done it, you just want it to be over with.

Neither suspenseful nor even comprehensible, John Swetnam's dashed-off script (carelessly directed by Olatunde Osunsanmi) throws up plenty of red herrings - and a stupendously idiotic ending - but not a single character worth caring about.

Evidence suggests that there's a much better film lurking under the surface here, but the one we get results in, at best, a hung jury.

There are interesting ideas here, sadly let down by a weak central plot and formulaic realisation.

may lose [the] viewer before the surprises late in the film

The story's strained, reaching plot goes so far off the CommonSense-o-Meter that there's more than enough "evidence" to convict this movie of impersonating a good mystery.

This is a terrible horror movie. It's like they take a shitty found footage horror film and they add a team of detectives watching the video after the fact in order in order to find out who's the culprit and then, somehow, that's supposed to make the film more interesting than it actually is. News flash: it doesn't. It's one of those movies that mumbles, fumbles and stumbles its way until the last act, where they do the flashback reveal of what actually was going on. Or as I like to call it: the Saw ending. If memory serves me correctly, and I've seen every Saw film, I think they did this type of ending in every installment of the franchise. They do the flashbacks and reveal all the details and solve the mystery that, hopefully, invested you in the film's story. This is that type of film. There's one little problem though, this movie is not even interesting or that good to begin with. Despite being a 'slasher' at heart, there's a surprisingly lack of gore in the film. I mean that in the sense that there's implied blood and guts, but you rarely ever see any of it. Like they were too squeamish for their own good. It's not like if the entire film had explicitly shown blood and guts that it would've honestly improved by much, but there would've at least been something that might have been good. The non-found footage scenes with the detectives are pretty terrible and are incredibly poorly shot. The acting is practically nonexistent. There's some good actors here, but you wouldn't know it by how the film was cut together. They just don't the actors and actresses in this film any favors. The way the film is paced is also a problem, it's almost like it's sabotaging itself with how the film is paced. I'm honestly really struggling to come up with any redeeming qualities this film may have had. The found footage style was absolutely dreadful in this goddamn film. Might actually be some of the worst usage of this method that I've ever seen. The glitches themselves are a part of the narrative, and this might actually be one of the only legitimately clever things the film really does, but the fact that it plays a role in the story doesn't make it any less insufferable to watch. If 'shitty usage of found footage' was a phrase in the dictionary, and why the fuck wouldn't it be, this would be the picture next to the definition. Honestly, I can't say it enough. If ever there was ammunition for the 'found footage sucks' people, it'd be this film. It's just terrible. The reveal of who the villain(s) were was also pretty good in that they actually drop hints in there, so it's not like it's entirely nonsensical. Though it does lead to the worst line of the entire film, which also ends up being the last line of the entire film. So they couldn't get that right. They couldn't even use an actually decent twist that well, at least after the fact. It's just so stupid and they, the characters delivering it, decide to deliver this line at the same time, like they were in a fucking infomercial. It was pathetic and laughable. Though more the former than the latter. Now that I think about it, I really hated this movie honestly. Reviewing it has revealed a new disdain and distaste for this movie. This was just the drizzling shits and there's no way I would ever recommend this to anyone. Not even if you're a horror super geek and you must watch any and all horror movies available to you. Awful fucking movie, just dreadful.

In the desert of Nevada, police uncover one of the most brutal crime scenes they've ever seen. There are a ton of bodies that are so badly mutilated, that they can't even tell if their victims are male or female. There is also an overwhelming lack of evidence, that is except for one small mini-cam found amongst the ruble. Evidence was one of those films that wasn't great, but wasn't terrible either. There is enough going on that you will keep watching it and you will be glad you did! Watching as many movies as I do, I tend to figure things out pretty quickly, and I was sure I had this film figured out early on. As I got to the end of the film, I was sure I knew what happened, and I was somewhat disappointed at the predictable story. Then, the writers throw a huge twist into the plot that you will never see coming and it really makes the whole film. Evidence quickly becomes one of those films that will keep you thinking about it long after the credits role, and too me, that is the best kind of movie. No one of name really stars in this film and there really aren't any stand out performances, it's just one of those movies that stands on a strong story. I usually hate these cheaply made, found footage films. The plots are lazy and they rely on cheap scares and effects to make people jump, but Evidence wasn't like that. The film starts off really slowly, but gets better and better leading up to an ending that no one will ever see coming. If you like a good mystery with that amazing twist in the end, Evidence will delivery exactly what you're looking for.

Lacks style and eleagance and being short of any real character development is a movie disaster but watchable unlike most crap I watch!

Evidence is yet another found footage style horror tale mixed with detective crime elements to try and create something refreshing in a genre that has overstayed its welcome. This is a pretty good film that manages to be quite entertaining, but is never anything great due to the fact that it relies on a clichéd formula. Still compared to other found footage films, Evidence does manage to be worth seeing; just don't expect anything great either. Evidence may not be anything groundbreaking, but it is better than most horror films that I have seen this year. There are a few good performances, but there is never anyone that steals the show to really make it a standout feature. This movie had so much potential in a being a far better movie than what it turned out to be, but at times it suffers from a lacking script. As it is, it is a good film, but it's similar to many genre films. Evidence had an interesting premise for a horror film, but most of the time it ends up being an average movie that just never reaches its full potential. This is worth seeing, but isn't a film that will reinvent the found footage genre. Give it a shot, you may enjoy it despite its flaws, and the premise is quite interesting, but like I stated previously, should have been much better than what was presented on-screen. Evidence is interesting from start to finish, but suffers from the stagnant formula of the found footage genre. The genre is overdone, and films like this, though good, never break new ground and are just like every other movie that we've seen before.